Fresh lemons are washed, sliced covered in salt for at least 24 hours, then drained and mixed with spices to cook in Tagines. Making Msir is easy and adds a unique flavor to meals but careful, just a small amount of the pickled lemon seasoning goes a long way. 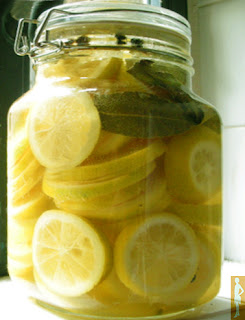 1/2 or 1 whole chicken, cut into pieces and skin removed

A handful of red or green olives, rinsed

1/2 of a preserved lemon, cut into quarters and seeds removed

Use a diffuser if you like, but as long as the heat is kept low, a traditional tagine should be safe on a burner. Cover the tagine, and bring the dish to a simmer. (Be patient, it takes a good 10 minutes for the tagine to heat up to this point.) Adjust the heat to medium-low or low, checking occasionally to be sure that you can still hear the tagine simmering. Tagine is done when potatoes are fork-tender, about 10 minutes. You can use a stew pot instead of a tagine, just add an extra 1 cup of broth to the recipe. Serve over cooked rice or couscous.

Did you know? African countries which lemons are exported are Algeria, Egypt, Libya, Morocco, and Tunisia; around 75% of the lemons grown are locally consumed Lemons are a fruit that is best known for a sour taste and it is used in various cuisines and desserts around the world.

The juice of a lemon is about 6% citric acid, which gives it a sour taste the distinctive sour taste of lemon juice makes it a key ingredient in drinks, and food lemons contain high amounts of calcium magnesium vitamin C and potassium.

It also contains small amounts of vitamin A and iron. North African Ancient Egyptians also ate lemons and consumed lemon juice to protect themselves against a variety of poisons since they have strong antibacterial antiviral properties. ♥