Africa has 54 countries, there are 15 African countries fighting wars and involved with perpetual terrorist violence. Sadly 27% of people on the African continent are directly affected by bloodshed, mayhem, and post-traumatic stress.


There are over 1.2 billion people living in Africa; 44.5 million live with daily threats of terrorism and war. According to the Africa Sun News as of June 2017, there are fifteen African countries involved in the war or are experiencing post-war conflict and tension.

July 13, 2012, The International Criminal Court (ICC)  issued an arrest warrant for Sylvestre Mudacumura, the head of a Rwandan rebel group, as well as a second arrest warrant for Congolese rebel leader Bosco Ntaganda, for alleged war crimes committed in the Democratic Republic of the Congo (DRC).

Sylvestre Mudacumura is the supreme commander of the Rwandan rebel group known as the Democratic Forces for the Liberation of Rwanda, also known by its French acronym FDLR. The group is the most recent incarnation of Rwandan rebel groups established by Rwandan Hutus responsible for the 1994 genocide of Tutsis and Hutu moderates in Rwanda and has been involved in crimes in eastern DRC for some time.

Mudacumura is suspected of committing war crimes, from January 2009 to the end of September 2010, in the context of the conflict in the Kivus in eastern DRC. The Court considered that there are reasonable grounds to believe that he is responsible for nine counts of war crimes, consisting of attacking civilians, murder, mutilation, cruel treatment, rape, torture, destruction of property, pillaging and outrages against personal dignity.

The new arrest warrant is an expansion of the previous one against Ntaganda, one of the top commanders in the militia led by Congolese warlord Thomas Lubanga Dyilo, who was convicted in March by the ICC for crimes in DRC.

The Court considered that there are reasonable grounds to believe that Ntaganda is responsible for three counts of crimes against humanity, consisting of murder, rape and sexual slavery, and persecution. In accordance with the arrest warrant, he allegedly bears individual criminal responsibility for four counts of war crimes consisting of murder, attacks against the civilian population, rape and sexual slavery, and pillaging.

The ICC is the first permanent international court set up to prosecute individuals for genocide, crimes against humanity, war crimes and the crime of aggression. In addition to the situation in DRC, the Court has ongoing investigations in the Central African Republic, the Darfur region of western Sudan, Uganda, Kenya, Libya, and Côte d’Ivoire.

Simmering rivalry between the Hema and Lendu goes back decades; in the five-year war that began in 1998, thousands were killed. In June 2018, more than 300,000 people have been forced to flee resurgent inter-ethnic violence in northeast The Democratic Republic of the Congo due to attacks and counter-attacks between Hema herders and Lendu farmers.

People were fleeing attacks and counter-attacks in Djugu Territory, with reports of both communities forming self-defense groups and being involved in revenge killings. There were several cruelties against civilians, killings, sexual violence, and other extreme forms of violence against civilians. Three of Ituri’s five administrative territories - Djugu, Mahagi and Irumu have all seen mass displacement after self-defense militia reportedly carried out revenge killings.

Hutus first settled in the Great Lakes Region of Central Africa between five hundred and one thousand BC and were an agricultural people who lived in large family groups. The Tutsis were a nomadic people who began arriving in the Great Lakes region from Ethiopia some four hundred years ago. Eventually, the Tutsis settled amongst the Hutus adopting the languages, beliefs, and customs.

Colonial rule, which began in the late 19th Century, did little to bring the groups together. The Belgians, who ruled what would later become Rwanda and Burundi, forced Hutus and Tutsis to carry ethnic identity cards. The colonial administrators further exacerbated divisions by only allowed Tutsis to attain higher education and hold positions of power.

However, economic differences between the groups soon began to form. The Tutsis as cattle-herders were often in a position of economic dominance to the farming Hutus and in many areas, like Rwanda, the minority Tutsis ruled the Hutus. The only difference between the two groups was economic, rather than ethnic.

Boko Haram has displaced nearly 2.6 million people across the four countries around Lake Chad since 2015. Lake Chad is one of Africa’s great and ancient lakes, sustaining rural communities on the edge of the Sahara for millennia. Attacks by Boko Haram in Chad’s Lac Region began in January 2015 when Chad declared a state of emergency. The Lake Chad region experienced intensified attacks in remote areas by Boko Haram militants from Nigeria. In 2015, the village of Blarigui, located in the remote swamplands of the Lake Chad Basin, close to Chad’s border with northeastern Nigeria, Boko Haram militants moved into the village and killed eight people by cutting their throats.

According to Amnesty International, at least 17,000 people, mostly civilians, have been killed since 2009, when Boko Haram launched its violent uprising to try to impose Islamist rule. Because of the Boko Haram insurgency in Chad, around 135,000 people are internally displaced from around the lake to makeshift camps scattered around the Chadian shoreline, competing for scarce resources with an already vulnerable host community.

Since May, armed groups have reportedly attacked at least 12 villages in Lac, particularly in Kaiga Kindjiria and Tchoukoutalia border areas, where approximately 15,000 people are displaced, the UN reports. The members of the Security Council condemned terrorist attacks perpetrated by Boko Haram in northeast Nigeria and Chad including the deadly attacks in Kwajafa in Borno state, Nigeria, on April 5, 2015 and in Tchoukou Telia, Chad, on April 3, 2015.

·        In East Africa, countries at war include Eritrea, Ethiopia, Somalia, Sudan, and Uganda.

·        In Central Africa, countries at war include Burundi, the Democratic Republic of the Congo, and Rwanda.

·        In North Africa, countries at war are Algeria and in South Africa, the countries include Angola and Zimbabwe.


The skyline beyond the northern suburbs of Mogadishu is seen through a bullet hole in the window of a hotel in Yaaqshiid District, where African Union Mission in Somalia (AMISOM) forces have pushed Al Shabaab militants beyond the city's northern fringes to the outskirts of the Somalia seaside in 2011.

Aftermath of fighting in Sudan's North Darfur on March 25, 2014; children stare at the remnant of a mortar projectile recently abandoned in the Alabassi camp for Internally Displaced People, in Mellit, North Darfur following clashes in early March.4 April is International Day of Mine Awareness in Darfur.

A woman and her young children stand in the evening light at an Internally Displaced People settlement in South Galkayo, Somalia with armed police standing guard. Thousands of people have been internally displaced from the South of Somalia and Mogadishu by renewed fighting in the region since the Transitional Federal Government, backed by the Ethiopians seized control from the Islamic Court in January 2007.

South Sudan Defense Forces soldiers and a woman carry their belongings along the road from Agok to Turalei South Sudan. The U.N. estimates 76,000 Abyei area residents fled south when Sudanese Armed Forces (SAF of the Republic of Sudan tanks invaded on Saturday, May 21, 2011, creating a humanitarian crisis. On May 16, 2017, the South Sudanese President Salva Kiir Mayardit renamed the army from Sudan People's Liberation Army (SPLA) to South Sudan Defense Forces. 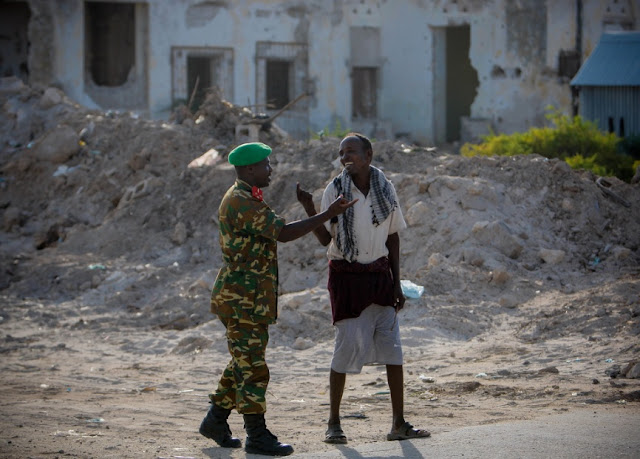 A Burundian officer serving with the African Union Mission in Somalia gestures with a Somali man on August 6, 2012, in front of a war-damaged building opposite the Aruba Hotel in the Somali capital Mogadishu. August 6, 2012, is the one-year anniversary marking the date that Al-Qaeda-affiliated extremist group Al Shabaab withdrew from fixed positions in Mogadishu after having steadily lost territory to forces of the Transitional Federal Government backed by troops from the African Union Mission in Somalia, ending their excessively harsh stranglehold on the capital and its people.

The devastating cost of Africa's wars three facts
On average, war, civil war or insurgency shrank each affected country's economy by 15 percent a year, with the continent losing $18 billion annually as a result.
During a 15 year period, the cost of conflict in Africa was equivalent to the funds granted to the continent in international aid over the same period, from 1990-2005.
In 2015 Nigeria suffered the highest number of civilian deaths in African war zones, Boko Haram was responsible for nearly half of all civilian deaths in African war zones.