African Ancestry helps people of African descent trace their ancestral roots back to a specific tribe, nearly 40 percent of Togo, Benin, Nigeria, Cameroon, and Gabon were enslaved along Africa's slave coast and sold to the present day US State of Virginia. 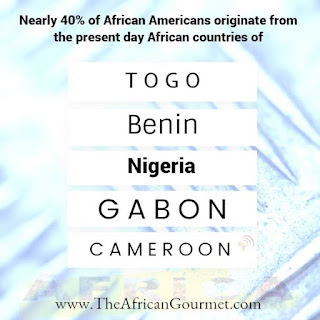 African tribes from which most of today’s African Americans originate; Discover your DNA in tribal groups in Africa which number in the thousands, each having their own tribal language and traditional culture.


The Portuguese brought the first slaves in 1444 from Northern Mauritania. King John II of Portugal continued the work of Henry the Navigator by appointing Diogo Cão to explore and further open up the African coast. Diogo Cão was born in 1452 and was the first European known to travel into the Congo and to explore West Africa in 1482, present-day Angola and Namibia. 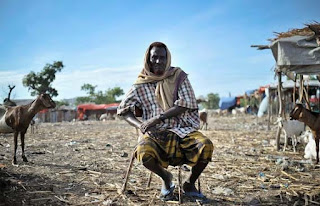 The discovery operations lead by Diogo Cão, the Portuguese were able to travel down the western coast of Africa initiating slave trade relations that grew into the Transatlantic Slave Trade. Between the 16th and the 19th century, nearly one-fifth of the enslaved Africans brought to colonial America were from African regions based mainly on the ports of Brass, Bonny, Opobo and Calabar in Nigeria.

The Slave Coast in the 18th and 19th-century transatlantic slave trade was the section of the coast of the Gulf of Guinea, in Africa, in the present-day republics of Togo, Benin, and Nigeria.

Nearly 40 percent of Togo, Benin, Nigeria, Cameroon, and Gabon were enslaved along Africa's slave coast and sold to the present day US State of Virginia. Many of these captives were Igbo, a people living in the area north what is now Nigeria. Here are the African tribes from which most of today’s African Americans originate. 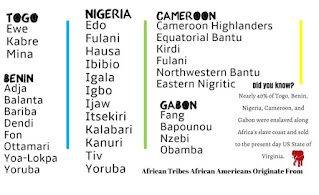 African tribes from which most of today’s African Americans originate.