African spice recipe that makes full use of your pestle and mortar. Use a mortar and pestle to grind and mix spices, crush herbs and nuts.

The mortar and pestle are one of the oldest most recognized pharmacy and kitchen tool used throughout the world. 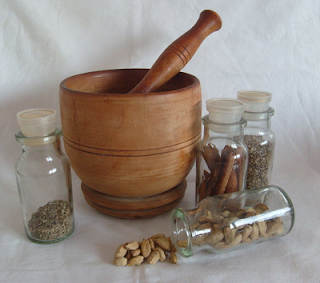 African spice recipe that makes full use of your pestle and mortar.

The mortar and pestle is a kitchen gadget that was found in every urban and rural African kitchen. However, emerging technology in the African food culture is threatening the once commonplace mortars and pestles of old. Mortars and pestles were once used to husk and dehull grain but village electric grain mills are slowly replacing the hand labor intensive mortars and pestles.

To the left is a charcoal stove for cooking along with a container for water and a plate of red pepper. To the right are two traditional earthen jars for water as well as plastic buckets for washing the dishes.

Typical meals in Mali consist of some kind of starch, rice or pounded millet, along with a sauce, which can be leafy green or more like gravy. Sometimes the meals may include a little meat.

African spice recipe that makes full use of your pestle and mortar.

In the mortar, place allspice, bay leaves, peppercorns, and cardamom seeds grind with the pestle to the desired consistency. Add remaining ingredients to the mortar and mix well. Store in an airtight container store away from heat and light. Do not store spices in the refrigerator.