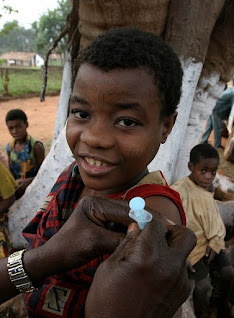 Above is a Mbuti woman of the Ituri Rainforest in Equatorial Africa receiving an immunization shot.

HIV/Aids is the biggest killer in Africa by far.

HIV AIDS disease continues to frustrate efforts to reduce extreme poverty and hunger, to provide universal primary education, and to reduce child mortality and improve maternal health. The world must take urgent account of the specific impact of AIDS on children. There are nearly 1,800 new HIV infections in children under 15, mostly from mother-to-child transmission, 1,400 children under 15 die of AIDS-related illness and more than 6,000 young people aged 15–24 are newly infected with HIV.

Sadly, less than 10% of the children who have been orphaned or made vulnerable by AIDS receive public support or services. AIDS is redefining the very meaning of childhood for millions, depriving children of many of their human rights of the care, love and affection of their parents; of their teachers and other role models; of education and options for the future; of protection against exploitation and abuse.

Diarrhea diseases caused the second-largest number of deaths in Africa.

Diarrhea disease is the second leading cause of death in children under five years old. It is both preventable and treatable. Each year diarrhea kills around 525,000 children under five. A significant proportion of diarrheal disease can be prevented through safe drinking water and adequate sanitation and hygiene.

Diarrhea is a leading cause of malnutrition in children under five years old. Diarrheal disease is a leading cause of child mortality and morbidity in the world and mostly results from contaminated food and water sources. Worldwide, 780 million individuals lack access to improved drinking water and 2.5 billion lack improved sanitation. Diarrhea due to infection is widespread throughout developing countries.

Cholera is an acute diarrheal disease that can kill within hours if left untreated. In low-income countries, children under three years old experience on average three episodes of diarrhea every year. Each episode deprives the child of the nutrition necessary for growth. As a result, diarrhea is a major cause of malnutrition, and malnourished children are more likely to fall ill from diarrhea.

Malaria is the third leading cause of death in Africa.

Most malaria cases and deaths occur in sub-Saharan Africa, malaria is a life-threatening disease caused by parasites that are transmitted to people through the bites of infected female Anopheles mosquitoes. Some 13 countries in Africa account for 76% of malaria cases and 75% deaths globally.

The people of sub-Saharan Africa can live in remote areas where access to healthcare is challenging due to lack of transportation, natural and physical barriers, and poverty. Deeply-rutted mountainous dirt roads, thick with dust in the dry season and treacherously slippery in the half-yearly rainy season are difficult to navigate not only for people traveling by foot, but also for taxis, bicycles, and mopeds with passengers perched precariously on the backs.

In areas with high transmission of malaria, children under 5 are particularly susceptible to infection, illness, and death; more than 70% of all malaria deaths occur in this age group. Between 2010 and 2015, the under-5 malaria death rate fell by 29% globally. However, malaria remains a major killer of children under five years old, taking the life of a child every two minutes.

Below: Tiru with her baby daughter in southern Ethiopia 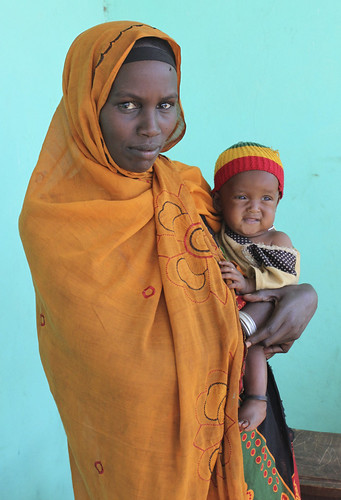 Democratic Republic of the Congo’s (DRC), a trio of diseases cause 42% of deaths in children under the age of five and they are malaria, pneumonia, and diarrhea.