Cassava is a root vegetable cooked like potatoes. The cassava plant is known under many names manioca, yucca, mandioca, manioc, tapioca, and cassada.

Cassava is grown and cultivated in around 40 African countries. The first Portuguese colonists saw the native Indians in Brazil growing the cassava plant used in the preparation of bread. It is believed that cassava was introduced to the western coast of Africa in about the 16th century by Portuguese slave trading merchants.


Root vegetables are grown underground and cassavas are tuberous root vegetables. Cassava are usually grouped in two main categories: Manihot palmata and Manihot aipi, or bitter and sweet cassava. Currently, about half of the world production of cassava is in Africa. The cassava plant is known under many names such as ubi kettella, kaspe, manioca, rumu, yucca, mandioca, aipim, manioc, tapioca, and cassada.

Cassava is grown and cultivated in around 40 African countries, stretching through a wide belt from Madagascar in the Southeast to Senegal and to Cape Verde in the Northwest. Around 70 percent of Africa's cassava output is harvested in Nigeria, the Congo, and Tanzania.

Traditionally, cassava is produced on small-scale family farms as the roots are processed and prepared as a subsistence crop for home consumption and for sale in village markets and shipment to urban centers.

Grown throughout the tropical world, cassava is second only to the sweet potato as the most important starchy root crop of the tropics. Throughout the forest and transition zones of Africa, cassava is either a primary staple or a secondary food staple.

Cassava is a perennial plant and can grow in poor soils on marginal lands where other crops cannot. It requires minimal fertilizer, pesticides and water. Also, because cassava can be harvested 8 to 24 months after planting, it can be left in the ground as a safeguard against unexpected food shortages.

Cassava produces bulky storage roots with a heavy concentration of carbohydrates, about 80 percent and is rich in carbohydrates, calcium, vitamins B and C, and essential minerals. Cassava roots are rich in protein and can be toxic if grown in poor soils and in dry conditions.

If not cooked correctly cassava will create cyanide, a deadly chemical. The taste of cyanide has been described as a bitter burning sensation when consumed. Cyanide prevents the cells of the body from using oxygen. When this happens, the cells die.

Directions
In a large frying pan heat vegetable oil. Add all ingredients, mix well and form small fritters, fry until golden brown about 3 minutes on each side. Sprinkle with extra salt or curry powder before serving. 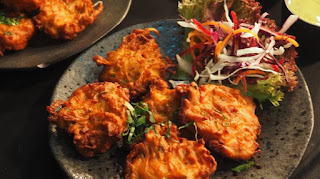