There are major differences between bananas and plantains.

Bananas and plantains are the "first fruit crop" as its cultivation originated during a time when hunting and gathering were still the principal means of acquiring food.

Bananas and plantains may have originated in Southeast Asia but their introduction into Africa is unclear.

Africans annually consume around 46 pounds or 21 kilograms of bananas and plantains per capita, but Ugandans consume 421 pounds or 191 kilograms per year, that is more than 1 pound .5 kilogram per day.

Banana are grown in nearly 130 countries. Uganda is the largest producer of banana and plantain in sub-Saharan Africa followed by Rwanda, Ghana, Nigeria, and Cameroon. Ugandans use the same word for food as the name of the local banana dish matooke.

Bananas are one of the most popular fruits eaten around the world. When ripe they are usually long and curved with a soft inside and are around 80% water.


Plantain resemble banana but are longer in length, have thicker skin, and contain more starch less sugar and are around 65% water. They are also a major staple food in Africa, Latin America, and Asia.

They are usually cooked and not eaten raw unless they are very ripe. Plantains are more important in the humid lowlands of West and Central Africa. One hundred or more different varieties of plantain grow deep in the African rainforests. 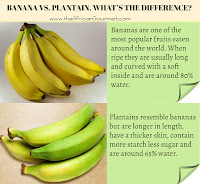