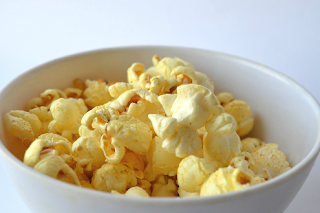 African ginger spice hot buttered popcorn recipe is easy to make and enjoy for your next Netflix and Hulu binge night.

When you say popcorn, most people think of the kind you microwave but popcorn is so much better than that. When popped fresh on the stove, our homemade African ginger spice hot buttered popcorn recipe is as easy to make as boiling water.

Over medium-high heat, warm a large heavy pot with a lid and add oils. If your oil starts to smoke, it is too hot. Test the heat of the oil by dropping in two kernels. When the kernel pops or spins in the oil, you are ready to add the remaining popcorn. Pour just enough kernels to cover the bottom of the pan. Shake the pan gently to be certain oil coats each kernel. Cover pot, remove from heat when popping slows or stops. Pour popped corn into a large bowl. Season with ginger spice mix to taste.

South Africa grows more than 2 million hectares of corn per year and for this reason, corn is a staple food in South Africa.  About 40 percent of the total popcorn production is exported to Namibia, Botswana, Swaziland, Zimbabwe, Ghana, Egypt and the former Ivory Coast Côte d'Ivoire.