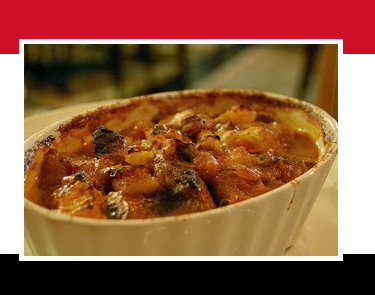 African recipe Egyptian Chicken Fatteh, the word fatteh means "to crumble" in Arabic. Fattah is traditionally served with lamb meat, but beef or chicken can be used in an Egyptian Fatteh recipe.


Fattah is traditionally served with lamb, but chicken can be used in this easy delicious Egyptian casserole recipe for Chicken Fatteh.


Salt and pepper to taste

In a large pot, add all ingredients except bread, onion and olive oil. Cover and simmer on medium-low heat 15 minutes. In a saucepan heat olive oil, add onion, cut bread into small pieces, and toast until crispy and golden brown. Preheat oven to 350 F. In large baking dish place bread inside evenly and then add the rice mixture on top over the bread layer. Bake 25 minutes serve warm.