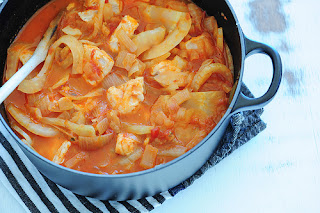 Heat the oil in a large pan and fry onion and spices for about 2 minutes. Add tomatoes, peanut butter and coconut milk simmer 20 minutes or until slightly thick. Add crabmeat. Serve with rice.


Three large populations clusters are found along the southern coast between Maputo and Inhambane, in the central area between Beira and Chimoio along the Zambezi River, and in and around the northern cities of Nampula, Cidade de Nacala, and Pemba; the northwest and southwest are the least populated areas.

In the coastal areas of Cabo Delgado and Nampula local communities are involved in seaweed farming in a system of poles installed in shallow areas close to the shore. Shrimps are produced in earthen ponds. The shrimp ponds are located close to the mangrove forest, on the bank of estuaries. The soils vary from sandy to clay.

Portuguese is one of the most widely spoken languages in Mozambique. The Portuguese language was imposed on the indigenous African population during the colonial era. As with most African countries, Mozambique has a major language diversity, with no one language dominating demographically.

Mozambique was once one of the largest coconut or coqueros, as they are locally called, producers in the world until 2011 when Lethal Yellowing (LY) spread across the African country, plummeting a once-thriving industry into chaos.