South African herbal medicine practitioners are called Nyanga. They seek the nature of the illness and its cure by meditating or going into a trance in order to get advice from a God or spirit. Flowers are beautiful, but so are herbs. The spice rack is not just jars of spices you add a dash here and there, they also have a special meaning in herbal medicine art. 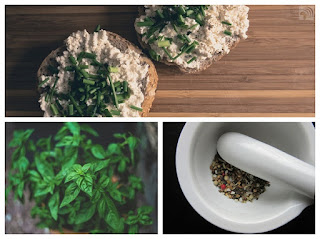 The dictionary defines herbs as any non-woody seed bearing plant with leaves, seeds or flowers used for flavoring, medicine or scent. Spices are an aromatic or pungent vegetable substance used to flavor food.

Many herbs in South Africa today are being produced for the valuable oils in their flowers and leaves. Herbs come from the leafy and green part of the plant however spices are parts of the plant other than the leafy bit such as the root, stem, bulb, bark or seeds.

In South Africa flowers and foliage are distilled to extract essential oils that are used in aromatherapy, herbal medicine and in the food industry.

Herbal medicine is the art and science of using herbs for promoting health and preventing and treating illness and has been Africa’s primary form of medicine since the beginning of time. South African herbal medicine practitioners are called Nyanga. They seek the nature of the illness and its cure by meditating or going into a trance in order to get advice from a God or spirit.

Cumin is a spice made from the seeds of the Cuminum cyminum plant. Cumin is usually purchased in the form of whole dried seeds or as ground powder. It is a typical ingredient in many spice blends, such as curry powder. Cumin is a staple spice in many cuisines, especially African, Mexican, Indian, and Asian. Spanish and Portuguese colonists introduced cumin to the Americas.

Cumin seeds traditionally are used to help the digestive system, and scientific research is beginning to bear out cumin's age-old reputation. Cumin is native to Egypt and has been cultivated in the Middle East, India, China and Mediterranean countries for millennia. Throughout history, cumin has played an important role as a food and medicine and has been a cultural symbol with varied attributes.

During the Middle Ages in Europe, cumin was one of the most common spices used. Around that time, cumin added another attribute to its repertoire it became recognized as a symbol of love and fidelity. People carried cumin in their pockets when attending wedding ceremonies, and married soldiers were sent off to war with a loaf of cumin bread baked by their wives. Cumin's use for fortifying love is also represented in certain Arabic traditions in which a paste of ground cumin, pepper and honey is thought to have aphrodisiac properties.

The color of basil varies from green to blue to purple, and plants can grow to from 1 to 10 feet in height, depending on the species. The distinctive scents and flavors of the many basil species and cultivars are due to the composition of essential oils found in the leaves and other parts of the plant.

Basil is a part of religious traditions around the world, from Christianity to Hindu. Holy basil, Ocimum tenuiflorum, is particularly sacred in Hindu tradition. It is thought to be the manifestation of the goddess, Tulasi, and to have grown from her ashes. It has been considered an aphrodisiac by some, is associated with the pagan love goddess, Erzuli, and is used in love spells. In Italy, where sweet basil is called kiss me Nicholas it is thought to attract husbands to wives, and a pot of basil on a windowsill is meant to signal a lover.

In folklore, if a man accepts a sprig of basil from a woman, he will fall in love with her. As is typical for its folklore, while being linked to love and attraction, basil has also conversely been associated with chastity. In Italian folklore, basil is associated with both love and death when basil sprouts from the head of Lisabetta of Messina’s slain lover. Basil is considered a good luck charm in some folklore.

It is reportedly used in exorcisms, for protection and to attract wealth Basil’s symbolism in the Victorian language of flowers also reflects its dual nature. It signifies both hatred for common basil and best wishes for sweet basil.

Chives are among the world's most versatile and prolific herb plants hence the flower meaning usefulness. Chives are part of the allium family of vegetables and herbs. This family also includes garlic, scallions, onions and leeks. Allium vegetables have been cultivated for centuries for their characteristic, pungent flavors and for their medicinal properties. Chives contain choline.

Choline is an important nutrient that helps with sleep, muscle movement, learning, and memory. It also helps to maintain the structure of cellular membranes, aids in the transmission of nerve impulses, assists in the absorption of fat and reduces chronic inflammation. Spice racks are not just jars of spices you add a dash here, spices have a special language all their own. 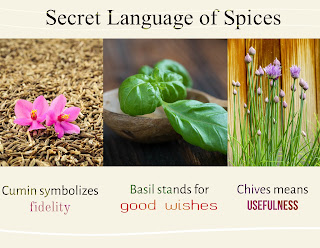