Best Lamb Recipe from Around Africa

Our lamb recipe tagine is primarily used to slow cook stews and vegetable dishes. Because the domed or cone-shaped lid of the tagine traps steam and returns the condensed liquid to the pot, a minimal amount of water is needed when cooking. Use a stew pot instead of a tagine for this lamb recipe just add an extra 1 cup of broth to the recipe. 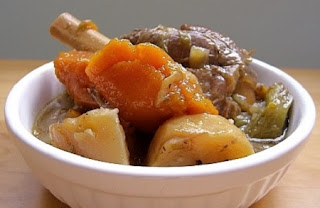 4 ounce dried apricots, cut in half

2-ounce dates, cut in half

Preheat the oven to 300F. Place the cayenne, black pepper, paprika, ginger, turmeric and cinnamon into a small bowl and mix to combine. Place the lamb in a large bowl and toss together with half of the spice mix.

Cover and leave overnight in the fridge. Heat 1-tablespoon olive oil and 1-tablespoon of argan oil in a large casserole dish. Add the grated onion and the remaining spice mix and cook over a gentle heat for 10 minutes so that the onions are soft but not colored. Add the crushed garlic for the final 3 minutes.

In a separate frying pan, heat the remaining oil and brown the cubes of lamb on all sides then add the browned meat to the casserole dish. Deglaze the frying pan with ¼ pint of tomato juice and add these juices to the pan.

Bring to the boil, cover with a fitted lid, place in the oven and cook for 2-2½ hours or until the meat is tormentingly tender. Place the lamb in a tagine or large serving dish and sprinkle over the chopped herbs.