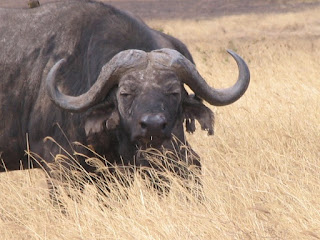 
The Ngorongoro Crater is referred to as Africa's Garden of Eden.
Ngorongoro crater is the largest unbroken caldera in the world. The crater, together with the Olmoti and Empakaai craters are part of the eastern Rift Valley, whose volcanism dates back to the late Mesozoic to the early Tertiary periods and is famous for its geology. The property also includes Laetoli and Olduvai Gorge, which contain an important paleontological record related to human evolution.

Ngorongoro Crater is an extinct volcanic caldera about 75 miles or 120 km west of the town of Arusha Tanzania. The caldera measures between 10 and 12 miles or 16 and 19 km across and has an area of 102 square miles or 264 square km. The Ngorongoro Crater has a heavily forested rim which rises 2,000 feet or 610 meters above the caldera floor to an elevation of 7,500 feet or 2,286 meters thus the name the African Garden of Eden. Ngorongoro Crater is thought to have formed about 2.5 million years ago from a large active volcano whose cone collapsed inward after a major eruption, leaving the present massive, unbroken caldera.

Over eight decades of archaeological investigation of the Ngorongoro Conservation Area, which includes the Ngorongoro Crater, provided substantial evidence of human evolution and environment changing aspects of living including footprints dating back nearly 4 million years.

The Ngorongoro Crater caldera floor is mainly open grassland home to a diverse range of animals including elephants, black rhinoceroses, leopards, buffalo, zebras, warthogs, wildebeests, Grant’s and Thomson’s gazelles, and the densest population of lions in the world. Lake Magadi, a 40 square mile soda lake during dry seasons is 80 percent covered in soda ash ringed by extinct volcanoes and is world famous as a habitat for great flocks of pink flamingos.

The 2009 Ngorogoro Wildlife Conservation Act placed new restrictions on human settlement and subsistence farming in the Crater, displacing Maasai pastoralists, most of whom had been relocated to Ngorongoro from their ancestral lands to the north when the British colonial government established Serengeti National Park in 1959. However, the Ngorongoro Crater is a major tourist attraction since the 1930s when a lodge was built on its rim.

Did you know?
From The Journal of Robert Ripley of Ripley’s Believe It Or Not
“After 80 miles of bumping along, which might have aided our digestion, but was a little hard on the tops of our heads, we saw a great expanse of snow. Of course it wasn’t snow. It was lake Magadi, that famous Lake of Soda, and one of the natural wonders of the world.” – Robert Ripley, 1933

The soda from Ngorongoro Crater lake Magadi is a coal color when harvested, but after processing becomes white. Soda ash is used domestically as a detergent and in the manufacture of glass and is an essential salt in giving ramen noodles their distinct flavor.

The Ngorongoro Conservation Area which includes the Ngorongoro Crater spans vast expanses of highland plains, savanna, savanna woodlands and forests, from the plains of the Serengeti National Park in the northwest, to eastern Great Rift Valley.

Ngorongoro crater documents the development of stone technology and the transition to the use of iron. The area is seen to have the potential to reveal more evidence concerning modern humans, modern behavior and human ecology.

Ngorongoro Conservation Area is home to a population of some 25,000 large animals including the densest known population of lions.

No hunting is permitted in Ngorongoro Conservation Area, but poaching of wildlife is a continuing threat.