Congress made the importation of slaves into the United States illegal in 1808. Joseph Jenkins Roberts 1809-1876 the son of free blacks and the oldest of seven children was a wealthy Monrovia merchant who had emigrated in 1829 from Petersburg, Virginia, became the first black American Colonization Society (ACS) governor of Liberia Africa in 1841. 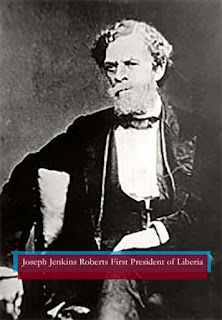 In the year 1818 representatives were sent to West Africa to find a suitable location for the new “back to Africa” colony, but they were unable to persuade local tribal leaders to sell any territory. In 1820, 88 free black settlers and 3 society members sailed for Sierra Leone. They found shelter on Scherbo Island off the west coast of Africa.

Congress made the importation of slaves into the United States illegal in 1808. In 1819, Congress passed an "Act in addition to the acts prohibiting the Slave Trade." Africans removed from slave ships by the U.S. Navy after the abolition of the trans-Atlantic slave trade were also put ashore in Liberia. By 1867, more than 5,700 people came to Liberia under the abolishment of the transatlantic slave trade agreement.

Joseph Jenkins Roberts 1809-1876 was a wealthy Monrovia merchant who had emigrated in 1829 from Petersburg, Virginia, became the first black ACS governor of Liberia in 1841. In 1848, he was elected the first president of an independent Liberia. He achieved international recognition for the new country before leaving the presidency in 1856. After many years as president of Liberia College, Roberts again served as Liberian president from 1872-1876.

Those who believed that Liberia was a symbol of African American capacity to govern a republic, to expand their commercial skills, and to spread Christianity and education, held Roberts up as an example of black achievement.

The settlers endeavored to retain the American culture they brought from the United States. Today, about 5% of the population of Liberia is descended from these settlers.
The settlement in 1824 was named Liberia and its capital Monrovia, in honor of President James Monroe who had procured more U.S. Government money for the venture.

The U.S. Government provided little financial and military support to Liberia as a result, in 1847, Liberia declared independence from the American Colonization Society in order to establish a sovereign state and create its own laws governing commerce. The Liberian flag is a symbol of the history of the Liberian state and its relationship with America.

Joseph Jenkins Roberts was the last governor of Liberia and served as the first President of Liberia after independence was won July 26, 1847.