Hippopotamus are one of the most dangerous animals in Africa but that does not stop the legal and illegal black market trade in hippopotamus teeth. One hippo tooth can fetch up to $600. Hong Kong is the largest market for hippo teeth where an increased demand for ivory from hippos hippo teeth are often used for jewelry, piano keys, chess pieces, furniture inlays, hunting trophies and other art items.
Trading Hippopotamus Teeth For Cash
You may think of ivory from elephant tusks but hippo teeth are made of ivory also. Hippopotamus teeth are used as ivory after the thick, hard enamel layer is removed. Elephant teeth are up to 6 feet long while hippo teeth are up to 2 feet long.
Hippo teeth tusks are used like elephant ivory for carved decorations. Hippos also have the largest teeth of all land animals. Additionally, other parts of both animals such as feet and skulls are valued as statement or souvenir items.
Hippopotamus have a low birth rate, female hippos have only one calf every two years, so a reduction in population size can have a long-term impact.
In 2006, it was estimated that only between 125,000 and 150,000 hippos existed, a statistic that prompted the International Union for Conservation of Nature to list the hippopotamus as a vulnerable species.
Hippo teeth are traded legally and illegally
Hippo teeth are traded legally and illegally. Those who are caught in the illegal trade in Africa can be sentenced to spend 2 to 5 years for illegally possessing wildlife products. Hippo teeth can still be traded under CITES, the Convention on International Trade in Endangered Species of Wild Fauna and Flora founded in 1973 though all international sales require an export permit.
CITES is an international treaty between governments to ensure that trade does not cause species to become extinct. It operates using a permit system depending on how endangered the animal or plant. 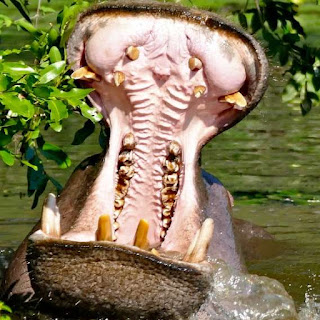 The illegal trade of Hippo teeth is responsible for more human deaths than almost any other animal in Africa. Hippopotamus are one of the most dangerous animals in Africa standing around 6 feet tall weighing upwards of 8,000 pounds. Hippos can easily outrun a human running up to speeds of 20 miles per hour. Also in 2011 in Zambia, Hippos hunting for food by rooting in the soil, became infected with anthrax.

Hippo teeth are mostly used in Hong Kong, Asia, where hippo ivory is carved into artwork.
Large hippo populations are found in the African countries of Botswana, Eritrea, Burkina Faso, Senegal, Zambia, The Gambia, Rwanda, Chad, Mozambique, Uganda, Kenya, Somalia, Tanzania, Sudan, the Democratic Republic of the Congo, South Africa, and Ethiopia.
Rules for trading ivory Hippopotamus teeth comes from Convention on International Trade in Endangered Species import and export and is legally restricted. New ivory can enter most countries under very limited circumstances for example for the purposes of forensic or scientific research.
There are two species of hippos; the large common hippo and the smaller pygmy hippo. Hippos are the third-largest living land mammal, after elephants and white rhinos.
Did you know?
The closest relations of the hippopotamus are whales and dolphins.