Sautéed fish is a traditional fish recipe among the Kru San-Pédro communities on coastal Côte d’Ivoire and is the perfect new recipe to try with friends.

Kru people are an indigenous people of Africa. The Kru belong to small independent tribal communities in Liberia, Côte d’Ivoire and Sierra Leone whose occupations were predominantly experts in navigating and sailing the Atlantic Ocean.

In this 28th largest African country lives the highest concentration of Ivoirian people who reside in and around the port town cities on the Atlantic coast. San-Pédro is a port town in southwestern Côte d'Ivoire and just as with most places in the world, what is on the menu depends on the cooks’ location. Coastal Côte d’Ivoire has one of the best fishing grounds in the world and fish recipes are abundant.

Juice of one lemon

Rinse the white fish fillets and in a shallow dish squeeze the lemon juice over the fish and season with spices. Heat olive oil in wide sauté pan over medium low heat, place the vegetables into the pan, and add garlic and sauté 3 minutes. Add the white fish the saluted vegetable pan and cook covered 2 minutes. Uncover pan, flip the white fish carefully and cook on the other side until cooked through, another three minutes. Serve with rice and fresh bread. 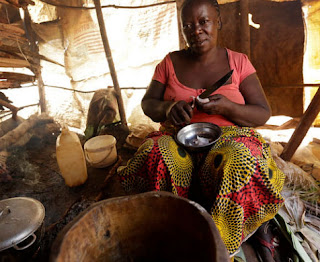 France granted autonomy to the territory of the former Ivory Coast within the French community on December 4, 1958. The Republic of Ivory Coast formally achieved its independence from France on August 7, 1960.

Most places and food in Côte d'Ivoire still have a heavy French influence because the Côte d'Ivoire currency, West African CFA franc, is backed by the French treasury and there are nearly 700 French companies including some 200 subsidiaries making Côte d'Ivoire the country where France has the strongest presence.

Yamoussoukro is the official capital and the site of the world's largest Christian church: the basilica of Notre-Dame de la Paix created at a cost of $200 million US and dedicated by Pope John-Paul II in 1990.

Easy rice recipes to make right now so you never have to eat or prepare a boring white rice recipe again.