The inspiration for natural housing materials made directly from the earth in both rural and urban African communities has not changed in thousands of years.

African people have always maintained a connection between home and a natural living qaurters. Many ancient African walls and roofs are made of sand, straw and clay.

Since the beginning of time, the people of Africa have shaped and defined their natural environment by using what was inspired by nature. Natural elements such as stone, wood, animal hides and feathers, mud, clay, shells, flowers, grasses, trees, leaves, branches, chalk and other natural elements have been shaped into shelters, household goods, medicine, clothing and jewelry for thousands of years.

The use of natural elements and materials in all aspects of traditional African life is a testimony to the profound way that nature shapes the existence of African people. 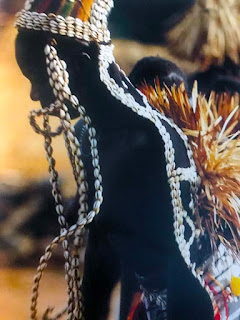 What is cowrie, it is a shell and there are over 200 species of cowrie shells but only two in particular; Cypraea moneta and Cypraea annulus are used as money.

Cypraeidae, common name cowries, singular: cowry, is the symbol of fertility and birth, as well as used for money and is a popular artifact used in fortune-telling.

Long prized by people for their shape and attractive colors, they were widely used for money in ancient times.

While some cowries are abundant, some species are now quite rare and get a very high price from collectors. Cowrie or cowry shells are believed to be the first form of universal money.

Cowrie shells are also used as a decoration around the world. Cowrie jewelry has been a popular form of African jewelry for centuries.

Many DIY jewelry kits feature cowrie shells for do it yourself-jewelry projects as hair charms, necklaces, bracelets, earrings their decoration uses are endless.

The Ghanaian cedi is the unit of currency of Ghana. The cedi is the Ghanaian word for cowrie, from the Fanti language of the West African Akan people.

Apart from their use as currency, cowries play a very important role as charms and in fetish-worship among the Ewe people of Togo.

These charms are worn on the neck, arm, wrist, and ankle, and regarded as talismans against wounds and sickness, and for luck. Being ornamented with cowries in many coastal parts of Africa is a common appearance. 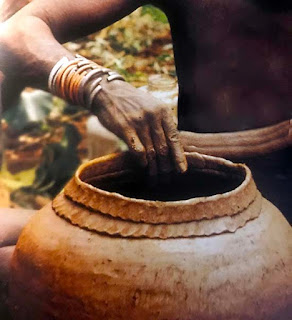 Pottery is one of the oldest and most widespread functional arts in Africa.

Pottery making has a long history in Africa and is one of the oldest functional arts using what is available in natural surroundings.

Pottery is clay that is modeled, dried, and fired having practical uses in cooking, storing food, eating, drinking, and as ceremonial vessels. In most cases, pottery is made by women. Clay pots are often thick created from clay, sand, and water and used daily in African life.

Clay is found in abundance everywhere on the African continent. Clay is made by mixing dry clay with water in clay mixer.

Gathering the right type of clay is the first step, African women who have been making pots for generations are able to recognize good clay and other materials for making durable pottery. Clay straight from the ground in Africa is not like the clay you buy from a ceramic clay store or hobby supplier.

The Ovambo, Kavango, and Caprivi tribes in Namibia, use the hardened clay from termite hills, as it contains the glue saliva from the termites. This termite clay makes pots quite strong and helps with the binding of the clay in forming the pot.

Pottery has a utilitarian use in African food cooking, storing food items, eating, drinking, and as ritual vessels. Tools used to make pottery are anything easily available such as a rock with a somewhat flat bottom, or a stick.

Clay is worked by hand and shaped and fashioned into the desired shape free hand by pinching, coiling, and slabs work.

Coiling is the technique of rolling out coils of clay and joining to the pot using slip. Coiling has been used to shape clay into vessels for many thousands of years in Africa. After drying, the pots are put around a pile of wood, bark or dried animal dung and baked outdoors in a large open fire for many hours. 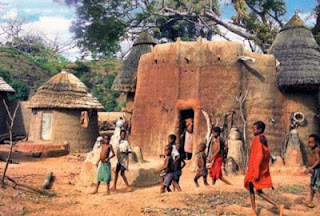 African Earth houses construction is as strong as concrete and lasts for a thousand years, in fact parts of the Great Wall of China were built with rammed earth and it's still standing today.

Earth houses are not new, in fact old methods of building clay and mud homes in Africa are now popular in cities since the demand for houses is high and construction cost in 30% less than conventional building techniques and creating a host of new jobs.

African Earth houses are both affordable and Eco-friendly on a continent where most things are very sustainable and renewable natural resources are plentiful.

Most houses are made with a mixture of sand gravel and nontraditional with just a little bit of cement added. After making the mix, mud is put into blocks and sun-dried to form bricks. These mud bricks are then used to make walls, and are plastered with the same mud mix.

Compared to conventional buildings made of concrete, earth homes have good indoor air quality. Earth houses are naturally insulated, so they will be cool in summers and warm in winters helping to save electricity. African Earth houses might last a thousand years.