Neck elongation rings how to put on and take off

Neck elongation rings how to put on and take off. 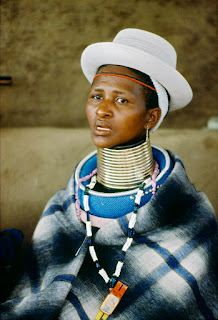 For centuries, married South African Ndebele tribes’ women saw wearing heavy rings around their neck as an honored status symbol. Neck rings are any form of stiff necklaces worn around the neck of an individual. The neck rings are usually made of copper or brass.

During initiation, girls wear an array of colorfully beaded hoops called izigolwan around their legs, arms, waist, and neck. After marriage, the Ndebele wife would wear copper and brass rings around her arms, legs, and neck, symbolizing her bond and faithfulness to her husband, once her home was built.

Idzila rings were believed to have strong ritual powers. Husbands used to provide their wives with rings; the richer the husband, the more rings the wife would wear. These outward symbols can be removed only in case of death of the spouse. Today it is no longer common practice to wear these rings permanently.

How Are Neck Rings Put On.

However, the Western world has picked up the ancient practice of wearing neck rings in art called body modification. However, when you begin wearing brass neck rings as an adult you are not really stretching your muscles or bones.

The process of neck elongation begins when a child is young, around five years old, where heavy brass coil collars are wrapped around the child's neck. As the child gets older new rings are added slowly until as an adult over 15-25 rings weighing over 25-30 pounds is wrapped around the neck.

Bones must be small and flexible in order for neck elongation to happen. Young girls are groomed by female elders on how to wear neck rings and function in everyday society. These female Elders are also responsible for adding additional coils every few years or so.

I bet you thought the neck bones actually stretch when using these rings, the practice should be called shoulder recession instead of neck elongating because the neck never stretches. The weight of the rings pushes the shoulders down and collapse the collarbone. Lowering the shoulders is what really makes the neck appear to be longer.

How Neck Rings Are Taken Off.

Contrary to popular belief, once neck rings are removed the neck does not snap like a twig. However, muscles in the neck are weak and may have a hard time supporting the head.

The brass coils are carefully removed one by one since the rings have taken on the full support and the muscles are weak. Neck muscles can be strained from neck rings and cannot move through its normal range of motion.

The most important role of the neck is that it supports the head and that it houses arteries that supply blood to the brain from the heart. Range of motion was limited wearing the neck rings but with physical therapy pain, swelling, and stiffness can be resolved depending on the age of the neck ring wearer.

About the South African Ndebele Tribe.

The South African Ndebele origins are unknown however; their history can be traced back to chief Mafana in the 1600s. The Ndebele first officially recorded chief, chief Mafana was succeeded by chief Mhlanga.

The Ndebele second chief Mhlanga had a son named Musi who decided to leave his homeland. Chief Mhlanga did not name an heir, after his death his two sons argued over the position, and the tribe divided into two divisions, the Manala, and the Ndzundza.

Their tribal homeland, KwaNdebele, was created in 1979, during apartheid, when the white South African government forced blacks onto "homelands" under a policy that confined 87% of the country's population onto 13% of its land. The 97-square-mile Ndebele homeland was set up in the Transvaal, in what is now known as Mpumalanga province.

South African Ndebele people maintained the use of the isiNdebele language, rituals, customs and art forms as a means of asserting their identity and resistance to outsiders. The Ndebele wall paintings have a strong symbolic value and are closely linked to the home and to the relationship of the person.

Women paint on the outside walls and sometimes also on the interior walls with rich geometric patterns learned from childhood. The walls are changed and repainted in particular moments of family life. This art form has developed in the second half of the nineteenth century, using bright of the brightest colors. Earth tones were used in the past. 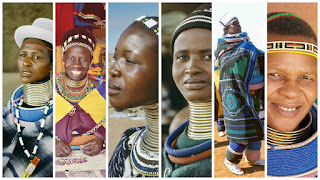 Over time, among the youngest populations, this custom to wear the idzila neck rings for a lifetime is disappearing.