Ravaged by civil wars, in Africa the population of persons with amputees represents a large percentage of physical disabilities.

The West African Country of Sierra Leone has been ravaged by civil wars, but there are no accurate statistics of the number of casualties, war-wounded including amputees and the post-traumatic stress sufferings.

There are around 82 million people affected by some form of disability in Africa, that is around 10% of the population. However, this might be a conservative estimation as different tools for defining and measuring disability are used in many African countries. Around 80% of people with disabilities, particularly in the youth population, live in low-income countries and that poverty further limits access to basic health services, including rehabilitation services.

In Africa, the population of persons with amputees represents a large percentage of physical disabilities. Among this population, a majority needs equipment such as fittings and wheelchairs. During the Sierra Leone civil war from 1991-2002, cutting off people's’ limbs, in most cases their hands, was one of the brutal strategies used by members of the Revolutionary United Front to terrify people to support them. Some 27,000 Sierra Leoneans are estimated to have been disabled or have had one or more of their limbs amputated during the civil war.

According to the IRINNEWS, in 2004 the Truth and Reconciliation Committee was established to deliver accountability for human rights and abuses. They issued a report recommending that amputees, war widows, children, victims of sexual violence and the seriously war-wounded, should receive reparations in the form of free education for children, free health care and skills training to be managed by the National Commission for Social Action. However, of the 32,000 people registered, 20,107 have received only a cash handout of between $70 and $200, and 12,000 have received nothing at all. 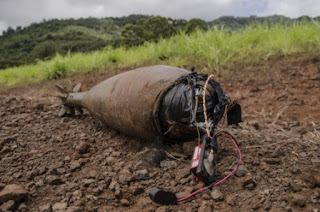 An Unexploded Ordnance or UXOs are explosive weapons such as bombs, shells, grenades, landmines, naval mines, etc. that did not explode when they were employed and still pose a risk of detonation, potentially many decades after they were discarded. Sierra Leone is extremely poor and nearly half of the working-age population engages in subsistence agriculture. The chance of digging up a UXO while farming is a very real threat.