Sankofa learning is a life-long process

The past illuminates the present, Sankofa Asante Adinkra symbol means know your history is to know yourself, the search for knowledge is a life-long process.


Sankofa learning is a life-long process


The Akan have an ancient and rich cultural heritage that includes the extensive use of pictorial symbolism in the writing system known as Adinkra, which was created by the Ashanti craftsmen of Ghana. Sankofa Ashanti or Asante Adinkra symbol represented either by a bird with its head turned backward taking an egg off its back, or as a curvy heart shape.

“Se wo were fi na wosankofa a yenkyi,"
"It is not wrong to go back for that which you have forgotten."

The Akan believe that the past illuminates the present and that the search for knowledge is a life-long process. The Sankofa symbol illustrates the quest for knowledge and the importance of learning from the past.


Sankofa means return and get it, symbolizing the importance of learning from the past. Sankofa also stands for you can always correct your mistakes or with wisdom use past experiences to build a promising future. Know your history is to know yourself. 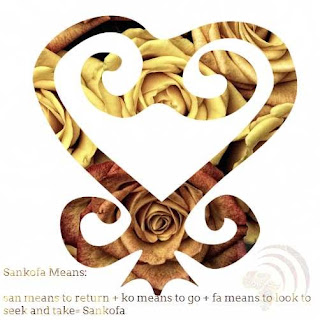