Tej is or honey wine is a favorite brew in Ethiopia, traditional Tej wine is made by boiling the gesho plant’s stems with honey and fermented over a long period of time.

In Africa, it is usually women who brew beer, make Tej, and sell these products. In some parts of Africa, the homebrewed traditional production and drinking of honey wine are still very common. In Ethiopia, honey is not made into beer but into Tej, which is honey wine. Tej is a very important drink in Ethiopian cultural life, served at traditional gatherings and special religious ceremonies. Tej is not necessarily alcoholic – often it is drunk before the brew has started to ferment when it still has a strong yeasty flavor.

Tej is made in huge wooden barrels, which are cleaned and then scoured with special leaves. The barrel is then filled, one part of honey with five parts of water. The barrel is covered with a clean cloth and left for a few days: fermentation begins. Now some very special leaves are added: these are gesho leaves of Rhamnus prinoides, which have been chopped up and then boiled. About five kilograms of this boiled leaf is added to each barrel. After gesho is added, the sugars in the honey are converted to alcohol and the Tej increasingly acquires its distinctive dry and bitter flavor. Finally, just before serving, a further half bucket of honey is tipped in to give sweetness to the final brew.

Tej is served in special glasses called birrille. These are like small glass vases with bulbous base and narrow neck. For drinking, the birrille is held in a special and rather dainty way between the first two fingers and thumb. Tej has a good flavor, something like cloudy, strong mead. The quality and amount of Tej served at a marriage or other celebration is directly linked with the wealth of the host.

Tej is also known as mead often made at home or at special local brewing houses. Tej bets, or honey-wine houses, look modest and unassuming from the outside, but these gathering spaces are central tenets of Ethiopian life. Tej is widely drunk in Tej houses both in Ethiopia and Eritrea, but you can always make yours. 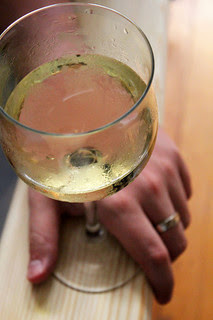 Add honey to water and mix well until fully incorporated. Chill mixture until cold then add wine, mix well, chill and serve. Traditional Tej wine is made in small batches and is a sipping wine due to its sweet taste.


About the Gesho Plant


Rhamnus prinoides or gesho plant is an indispensable plant for the rural African community. Gesho plant was discovered in 1788 is also known as Dogwood or Shiny Leaf in English, Blinkblaar in Afrikaans, umGlindi in Xhosa, Musvosvadziva in Shona, umNyenye in Zulu and gesho in Amharic.

The African dogwood is a dense shrub or a small tree with glossy foliage and decorative red and purple berries, the tree is no relation of the American and Asian dogwoods. Gesho is a versatile plant used for food, firewood, wages and medicine. Gesho grows bordering forest and at high elevations. The fruits, roots and leaves are utilized, no part of the Gesho is wasted. The leaves stems and branch are used to brew the popular drink Tej in Eritrea and Ethiopia.

The Gesho tree leaves are also used as an ointment for numerous discomforts and to relieve cranky babies. The principal use of this tree is for enchanted purpose in rural Africa widely used by African people as a protective charm to ward off lightning and evil and to bring luck in hunting. The Gesho tree is also used to cleanse the blood, to treat pneumonia, rheumatism, sprains, and stomach ache, and as a mouthwash in rural Africa. It is also used in the treatment of skin illnesses and lung infections.

The fruits are edible and small about the size of a pea ranging in color from green, to red then purple when ripe. The seeds are easily germinated without any special management or storage. Gesho is a widely planted cash crop sold in local markets from Ethiopia South to Angola and the Cape Providence of South Africa. Gesho tree African Dogwood can easily be grown from seed is a small evergreen good for small gardens and hedges, especially in cold areas. It is a very good small tree to plant in the garden to attract fruit-eating birds.