Five African countries with the least access to safe water

Many countries on this list who suffer from lack of access to clean and or improved safe drinking water are suffering from poor governance, protracted internal conflict, underdevelopment, economic decline, poverty, social and gender inequality, and environmental degradation. Water systems in Africa that have ground water and surface water sources may be susceptible to fecal contamination. In many cases, fecal contamination can contain disease causing pathogens such as Legionella, Giardia lamblia, and Cryptosporidium..

In Africa more than 25 percent of the population spends more than half an hour per round trip to collect water and sadly people living in the slums of Africa pay 5 to 10 times more for water than those living in higher income areas. 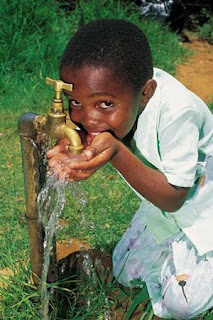 Throughout Africa freshwater is increasingly exploited through population growth, urbanization, agriculture, and industrialization.

Half of humanity now lives in cities, and within two decades, nearly 60 percent of the world's people will be urban dwellers.

Two main challenges related to water are affecting the sustainability of human urban settlements: the lack of access to safe water and sanitation.

In rural areas, piped-in water is non-existent in the poorest 40% of households, and less than half of the population use any form of improved source of water.

About 65 percent of Africa is arid or semi-arid and more than 300 of the 800 million people in Africa below the Sahara desert live in a water-scarce environment.

Rivers, lakes, and wetlands cover about 18 percent of Uganda’s total surface, including Lake Victoria, Africa’s largest freshwater lake and one of the major sources of the Nile River, the longest river of the world. Almost the entire country lies within the Nile basin. However, 40 percent of the population still had no access to an improved water source and 57 percent had no improved sanitation in 2004.

In rural Africa millions of people share their domestic water sources with animals or rely on unprotected wells that are breeding grounds for pathogens.

About 66% of Africa is arid or semi-arid and more than 300 of the 800 million people in sub-Saharan Africa live in a water-scarce environment – meaning that they have less than 1,000 m3 per capita per year.

The average distance that women in Africa and Asia walk to collect water is 3.7 miles or 6 kilometers.

Average water use ranges from 200-300 litres a person a day in most countries in Europe to less than 10 litres in countries such as Mozambique.

People lacking access to improved water in developing countries consume far less, partly because they have to carry it over long distances and water is heavy.

For the 884 million people or so people in the world who live more than 1/2 mile or 1 kilometre from a water source, water use is often less than 5 litres a day of unsafe water.

The basic requirement for a lactating women engaged in even moderate physical activity is 7.5 litres a day.

At any one time, close to half of all people in developing countries are suffering from health problems caused by poor water and sanitation.

Together, unclean water and poor sanitation are the world's second biggest killer of children.

Around 115 people in Africa die every hour from diseases linked to poor sanitation, poor hygiene and contaminated water.

It has been calculated that 443 million school days are lost each year to water-related illness.

Many schools have no water supply and almost half have no sanitation facilities. Of those schools with sanitation, only half had separate facilities for boys and girls.

Girls chose not to utilize coed bathroom facilities, either because they did not want to risk being seen to use the toilet, or because they were warned that these facilities were not private or clean enough.

The Water for African Cities Programme, initiated in December 1999, facilitates the adoption of measures to ensure access to environmentally sound water and sanitation service provision to the unserved, as well as improved access for underserved populations of the target cities. 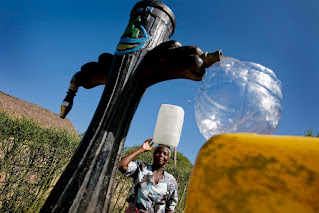