Showing posts from December 6, 2009
Show all 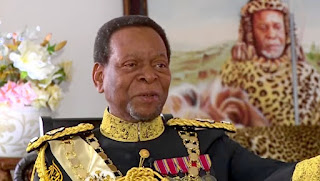 Zulu King Goodwill is a monarch who holds no formal political power, fulfilling the spiritual and ceremonial needs of the South African Zulu nation. The capital of KwaZulu-Natal is Pietermaritzburg. KwaZulu-Natal province stretches from Port Edward in the south to the borders of  eSwatini  and  Mozambique  to the north. North Coast of KwaZulu-Natal is renowned for its beaches and also known as the place where the Zulu King, Shaka, was buried. KwaZulu-Natal is the only province with a monarchy specifically provided for in South Africa's Constitution that was created in 1994 when the Zulu bantustan of KwaZulu and Natal Province were merged. KwaZulu-Natal is the home to the Zulu monarch, King Goodwill Zwelithini kaBhekuzulu who receives an income from the government for his position.  The Zulu royal family consists of the reigning monarch of the Zulus of South Africa, King Goodwill Zwelithini kaBhekuzulu son of Cyprian Bhekuzulu kaSolomon. His wives Sibongile Winifred Dlamini mar
Learn More
More posts