The Old Witchdoctor and His Grouchy Wife African Folklore Story

The Old Witchdoctor and His Grouchy Wife African Folklore Story


The exact source of this African folklore story is unknown but its moral lesson is clear. 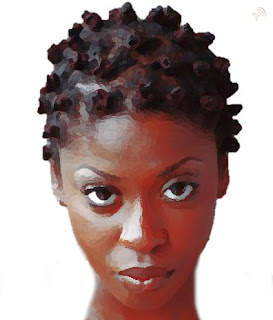 The Old Witchdoctor and His Grouchy Wife African Folktale.


In a somewhat out-of-the-way village in Kieyo there lived for many years an old witchdoctor who was renowned for his mildness and connection with the people and land.

He was not one, you know, who assumed their dress only, but he spoke to others of truth and decency, and his character bore out all he taught. He did not wander about but took up his residence in this village, and so, being always there, he came to be well known, and was often visited by many people from distant parts.

One day another younger Witchdoctor who was journeying north came and claimed friendship with him, and finding him in a special place where he usually spent his day, sat down near to him, and talked of the things that concerned them both.

It being near nightfall the old Witchdoctor asked the younger to come as his guest for the night, and to pursue his journey tomorrow. So they trudged together until they arrived at his home; but when the wife saw the guest and knew that he was going to stay the night, she grew much displeased with her husband, and very insulting.

It was in vain for the old Witchdoctor to say that his friend was a traveler, and a fellow traditional healer; the wife refused to settle down. The guest finding himself in an awkward position asked his host whether he had not better go on his journey at once, or find refuge somewhere else in the village for the night, for it gave him great pain to listen to the angry words of a woman.

“Oh, no!” said the old Witchdoctor, “I know she is very ill-tempered and cross, but I have a great respect for her all the same, and I must tell you the reason.”

The old Witchdoctor goes on to say “Do you not know that I am widely known as a good man? In consequence of this, and of the advice I give, I am visited by people far and near, and they all flatter and praise me to the skies.

Sometimes I have thought to myself that if this were to continue, I should be in danger of being proud and puffed up, and so be ruined not only here, but also hereafter. Now this wife of mine, when she fans herself into a passion, does me real good, and I become quite subdued; and the more turbulent she becomes the more I control myself and am quiet.

So you see there is a balance established between us, and the effect on me is that it softens my nature, and I am made more and more what we Witchdoctors aim to be; so what I lose in one way, I gain in another and a better way.”

The guest remained the night, and went away the next day deeply impressed with the wisdom of his friend and brother. 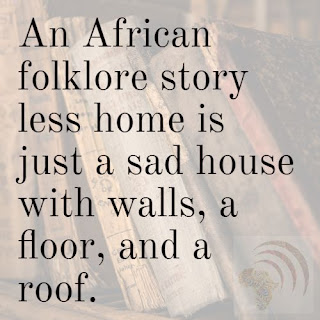 An African folklore story less home is just a sad house with walls, a floor, and a roof. Here are 21 Thought-provoking Details About African Folklore Stories


1. African folklore is a story with unbelievable elements, related as if it were true and factual.

2. Most often African folklore stories have a moral underlined at the end of the story.

3. Of diverse origins, most stories are associated with nature and human faults.

4. The central characters in African folklore are extraordinary figures compared to people in real life.

5. Anthropology is the study of humans and human behavior and scholars from many nations have devoted and are devoting their lives to the study of folklore.

6. The African folklore originally belonged to the oral tradition and was not collected in writing until missionaries began recording their missions to Africa.

7. Tricksters in African folklore stories are common such as Anansi. Anansi thinks he is the cleverest person in the room.

8. Many African folklore stories use as ethical guides as a theme.

9. Countless African folklore tales are proverbial in context and have different details and alternative versions depending on the African country of origin.

10. African folklore stories, in the beginning, were communicated face-to-face for entertainment purposes, enforcing tradition and teaching a life lesson.

11. African folklore stories are perfect for the boys and girls who like to listen to stories as well as to read them, and for the mothers and teachers who are looking for unique story lessons. Everybody knows classic American tall tales about people like Paul Bunyan, Johnny Appleseed and John Henry but few know about the Old Witchdoctor.

12. The main characters in African folklore stories are animals.

13. Folktales reflect the morals, superstitions, and customs of the African people.

14. Anansi is one of the most beloved African folktale characters. He often takes the shape of a spider and is considered to be the spirit of all knowledge of stories.

15. Reading African folktales will help families make connections to their cultural heritage better than a genetic DNA test from Ancestry or 21 and me.

16. African folktales usually have sly animals and spirits as the main characters.

18. African Folklore allowed the people of Africa to give meaning to the unknown phenomena in their lives and their surroundings.

20. African folklore narratives are known to everyone, regardless of age or education.

21. People of the world are inquisitive about ancient works of literature if that literature can be shown to relate somehow to their present. This is why African folklore is still very popular today.

The exact sources of many African folklore stories are unknown but their moral lessons are clear.

African folklore narratives are known to everyone, regardless of age or education. Reading African folktales will help families make connections to their cultural heritage better than a genetic DNA test from Ancestry or 21 and me.