Zimbabwe Executive President Robert Gabriel Mugabe has been in power since December 31, 1987 and his 40-year reign is ending with a courteous coup courtesy of Zimbabwe Army General Chiwenga and staff.
However Mugabe as of November 18, 2017 has rejected stepping down as Zimbabwe President, Robert Mugabe, Zimbabwe first prime minister, has been the country's only ruler as president since 1987.
On November 22, 2017 Mugabe announced he is stepping down as Zimbabwe president. 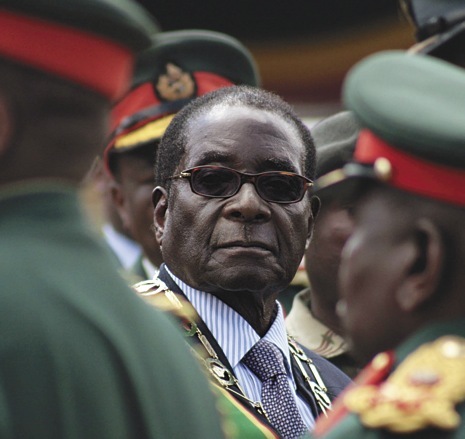 Many leaders do not support Mugabe staying in power, saying "We are presidents, we are not monarchs"

Robert Mugabe, Zimbabwe first prime minister, has been the country's only ruler as president since 1987 and has dominated the country's political system since independence in 1980. His chaotic land redistribution campaign, which began in 1997 and intensified after 2000, crippled farmers and thus the economy, and ushered in widespread shortages of basic commodities. Ignoring international condemnation, Mugabe was said to have rigged the 2002 presidential election to ensure his reelection.

In 2005, the capital city of Zimbabwe, Harare embarked on Operation Restore Order, supposedly an urban justification program, which resulted in the destruction of the homes or businesses of 700,000 mostly poor supporters of Mugabe opposition party.

Mugabe in 2007 instituted price controls on all basic commodities causing panic buying and leaving store shelves empty for months. General elections held in March 2008 contained irregularities where once again Mugabe opposition party protested. Mugabe was re-elected president in 2013 in balloting that was severely flawed and internationally condemned. In 2017, Zimbabweans are cautious, but hopeful that, after almost four decades of often-brutal rule, Mugabe who has governed for longer than many of his fellow citizens have been alive could be coming to an end.

Military vehicles were spotted on roads leading to the Zimbabwean capital Harare on Tuesday November 14, sparking rumors that a military coup was in the air. Later, soldiers seized the headquarters of Zimbabwe's national broadcaster ZBC and loud explosions and gunfire were heard.

Major General Sibusiso Moyo then read out a statement on national television, assuring the nation that President Mugabe and his family were safe. The military was only targeting what he called "criminals" around the president, he said, denying that there had been a coup.

According to a government source with direct knowledge of the talks, Mugabe had pushed back on a deal to replace him with an interim leader, arguing there would be a constitutional crisis if he left before his term expired.

On Thursday November 16, 2017 Mugabe was pictured smiling as he took part in talks with an army general and South African government ministers at State House but sources suggested he might be resisting pressure to resign. It is clear General Chiwenga and the army is in charge in Zimbabwe.
However, in public, Mugabe is still referred to as his Excellency, in Zimbabwean culture; the elderly are treated with respect. Mugabe made his first public appearance since Zimbabwe army took over. The 93-year-old Mugabe had been under house arrest for days.
Mugabe walked slowly up a red carpet and joined the crowd in singing the national anthem, then opened the graduation ceremony at Zimbabwe Open University, where he is chancellor. The event was apparently designed to convey a business-as-usual atmosphere the generals pulling the strings in Harare are desperate not to give the impression they are orchestrating an unconstitutional coup.

The talks with the General Chiwenga and current Zimbabwe President Mugabe have broken down. Frustrated with the lack of progress, the commander of the defense forces, General Chiwenga, set a deadline of Friday November 17, 2017 for Mugabe to agree to a deal, "or we do it the hard way," the source said. The military has denied that the events of this week amount to a coup, but residents were still unclear as to who is leading the country of Zimbabwe. On November 22, 2017 Mugabe announced he is stepping down as Zimbabwe president.


Robert Mugabe's ex-deputy “the Crocodile” Emmerson Mnangagwa, the man he fired last month is sworn in as Zimbabwe's president in Harare, Zimbabwe, November 24, 2017.

Did you know?
Zimbabwe takes its name from the Kingdom of Zimbabwe of the 13th-15th century and its capital of Great Zimbabwe, the largest stone structure in pre-colonial southern Africa.