Learn all about the Matsieng Footprints of a Giant One-Legged Man Rock Engravings in southeast Botswana.

About a 45 minute drive from the capital of Botswana, Gaborone, just after the village of Rasesa in the Kgatleng District of Botswana lays a Giant One-Legged Man Rock Engravings u-shaped footprints. Matsieng is one of the sacred ancestors of the local Southern Sotho Tswana people. 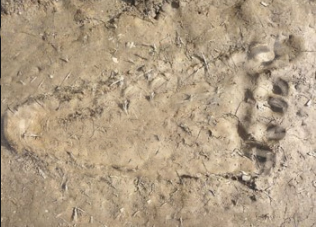 Local Botswana folklore tells of the Matsieng Footprints in a slab of sandstone punctured by two deep holes and sacred rock engravings are that the first ancestor of the Batswana, Matsieng who was a one-legged giant man who climbed out of one of the deep holes followed by his people, and their livestock and wildlife.

Petroglyphs are images created by removing part of a rock surface by incising, picking, carving, or abrading, as a form of rock art.
Respecting sacred history, the Matsieng animal and human footprints are thought to really be petroglyphs created by the ancestors of the Khoisan (San) people during the Late Stone Age.
Water holes and caves are sacred to the Khoisan people especially for rainmaking ceremonies and rituals. 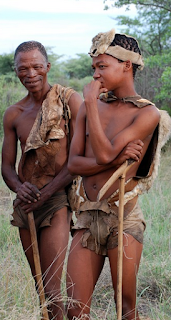 The oldest gene pattern amongst modern humans is that of the Khoi-San; the Khoi San are descendants of the first people who ever lived in South Africa.

Today there are about 100,000 Khoisan people, speaking 35 Khoe-San languages across southern Africa demanding to be referred to by their indigenous identity, San people rightly choose to call themselves Khoisan.

The Khoisan people are the descendants of the original Homo sapiens who have inhabited Southern Africa for more than 150,000 years.

Interesting Fact - The Southern Sotho people were unified as the Basuto during the reign of King Moshoeshoe in the 1830s. Moshoeshoe established control over several small groups of Sotho and Nguni speakers, who had been displaced by the difiqane.

Some of these communities had established ties to San peoples who lived just west of Moshoeshoe's territory. As a result, the South Sotho language or seSotho, unlike that of North Sotho, incorporates a number of click sounds associated with Khoisan languages.

Did you know?
Petroglyph vs Hieroglyph
A hieroglyph is a stylized picture used to represent a word, sound or idea in writing petroglyphs are images made by removing part of the rock surface by incising, pecking, carving, and abrading the rock surface.