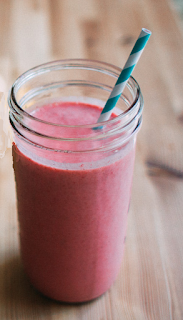 Directions
In a large bowl add sliced strawberries and sugar, mash mixture and mix well then set aside. Add milk and water into a large pot and boil 5 minutes, add strawberry syrup and vanilla stir well. Remove from heat. Cool. Let sit for 2 hours in the refrigerator. Add a tablespoon of mashed strawberries to each glass of milk serve and enjoy.

Did you know...?
Camel milk is a staple part of North African nomads for centuries and contains almost 10 times for iron than cow milk.
African food