Papaya is also called the fruit of the spirits and Coconuts are called the “Tree of Life”. Papaya and coconut together create a smooth sweet tropical drink recipe made for an African queen. 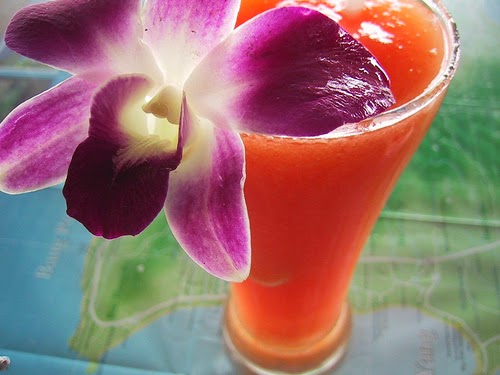 Papaya, papaw or pawpaw has sweet flesh with pungent undertones. The flesh is also soft when ripe with a buttery texture. Papayas grow in all tropical and subtropical countries throughout the world including Africa.

Coconuts are called the “Tree of Life” throughout the world because every part of the coconut is used for drinks, fiber, food, fuel, utensils, musical instruments, and much more. Perhaps the oldest reference of coconuts is from Cosmas, a 5th century AD Egyptian traveler.

He wrote about the “Indian nut” after visiting India and Sri Lanka formally known as Ceylon. Coconuts grow in regions are as far north as Hawaii and as far south as Africa's largest island of Madagascar.

African Recipes by The African Gourmet

Tzaneen South Africa is rich with tropical fruits, such as bananas, pineapples, mangoes, and pawpaws.

Place all ingredients in a blender and blend until smooth.