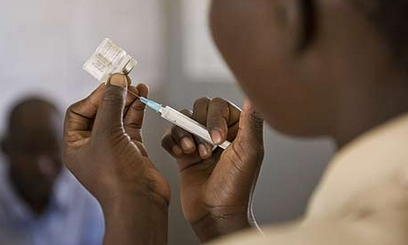 Target 6C on the United Nations Millennium Development Goals is to have halted by 2015 and begun to reverse the incidence of malaria and other major diseases.  The multinational pharmaceutical company GlaxoSmithKline malaria vaccine, Mosquirix™ receives a positive opinion from European regulators for the prevention of malaria in young children in sub-Saharan Africa.

The ball is now in the World Health's Organization’s court to assess how the world’s first malaria candidate vaccine might be used alongside other tools such as mosquito netting to prevent malaria. Early trials show the drug is effective on in children aged 6 weeks to 17 months; however, until final approval mosquito netting is still the most effective tool against malaria.

Malaria is caused by a one-celled parasite called Plasmodium and female Anopheles mosquitoes can only transmit malaria. The adult females can live up to 7-28 days in nature. Once a mosquito ingests the Plasmodium parasite it undergoes development and an incubation period from 10 to 21 days.

Unfortunately, 90% of all malaria deaths occur in sub-Saharan Africa and 77% occur in children under five. According to GlaxoSmithKline data from this trial program demonstrate that over the first 18 months following three doses of RTS,S, malaria cases were reduced by almost half in children aged 5-17 months at the time of first vaccination and by 27% in infants aged 6-12 weeks. At study end, four doses of RTS,S reduced malaria cases by 39% over four years of follow-up in children, and by 27% over three years of follow-up in infants.


GlaxoSmithKline has developed the Plasmodium vivax malaria vaccine; however the Plasmodium falciparum malaria is the most deadly type and the most common in sub-Saharan Africa where it causes nearly a million deaths a year.

The company has worked on the Mosquirix™ RTS,S  vaccine for over 30 years and the vaccine will save many lives. By 2050 Africa will house over 1/4 of the world’s population, disease prevention is a priority.

About 40% of malaria deaths occur in just two countries: Nigeria and the Democratic Republic of the Congo due to the large population size of both countries.