How the cunning leopard got his spots is a marvelous African folktale about the origin of his spotted leopard skin.

As the elders say, at one time, the Leopard was colored like a lion, and he had no dark markings; but he was pursued by Akiti, the renowned hunter, and feared that he might be slain. 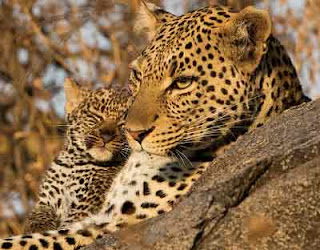 To avoid this he ate the roots of a certain magic plant, which had the effect of making him invulnerable to any of the hunter’s weapons.

Soon afterwards, Akiti saw him as he slipped through the dense undergrowth of the forest, but though he shot his poisoned arrows, Leopard escaped.

But where each arrow struck him, there appeared a dark mark, and now, though hunters still pursue him, he is rarely caught, but his body is covered with the marks of the arrows, so that as he goes among the trees he looks exactly like the mingling of the sun and shadow.

Did you know? Leopards are the smallest of the four big cats and are native to 35 African countries. The four big cats of the world are the tiger, lion, jaguar and leopard.