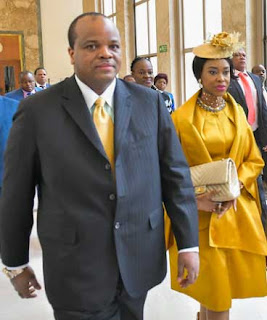 King of eSwatini spent millions on diamonds, private jets and 19 custom Rolls Royce's for his wives while 65% of eSwatini lives on $1.90 a day. King of eSwatini in the photo above with his 19th wife during a ceremony at the world bank; its good to be king or wife of the king? Rsponsible and irresponsible political leadership in eSwatini statement of the issues explained below. The eSwatini King, King Mswati III, has been head of the Swazi Royal Family since 1986 since he was 18 years old. In June 2021, it was reported the King fled the country with his wives to South Africa as a political Asylum. Landlocked eSwatini is almost completely surrounded by South Africa and depends on South Africa for a majority of its exports and imports and duties on imported goods. South Africa and eSwatini are joined at the hip as far as the economy is concerned. King Mswati III rules one of the world's last absolute monarchies and has ruled the eSwatini kingdom for 35 years. The King spends mil
Learn More
More posts