Russia's military presence in Africa is a long historic one. The Russian Congo military deal was signed in May 2019 to fix old war machines and guns.

In the African country the Republic of the Congo Brazzaville, a military cooperation agreement was signed with Russia in May 2019 providing military specialists to service Russian-made military hardware and equipment. The government state organization the Congolese Armed Forces is out armed using aging Russian Soviet-era weapons.

The Russian Congo military deal was signed in May 2019 after talks between Russian President Vladimir Putin and former Marxist Congolese president Denis Sassou Nguesso. Sassou Nguesso employs Private militias, which are are armed military groups that are composed of private citizens and not recognized by federal or state governments.
Many of the Russian military trainers are labeled as unarmed advisers but are speculated to be soldiers and private contractors working for the Russian government. Russia donated weapons and sent trainers to the African country the Republic of the Congo Brazzaville to assist the government’s fight against militia groups. The Congolese Armed Forces has limited capabilities due to obsolescent and poorly maintained equipment and low levels of training.
The Soviet Union voted in the Security Council, July 14, 1960 authorized Secretary General Hammarskjold to organize a United Nations military force to maintain order in the newly formed Republic of the Congo. The Soviet Union furnished aircraft and military aid directly to the Congolese government.
Russia's military presence in Africa is a long historic one. The Republic of the Congo was a Marxist-Leninist country until 1990. The collapse of the Soviet Union in December 1991 and the end of the Cold War changed the dynamics of Russians in Congo Africa. From 1964 to 1990 the country was a one-party state ruled according to Marxist-Leninist principles.
In 1997, a two-year civil war that ended in 1999 saw former Marxist President Denis Sassou Nguesso come back into power.  For 13 years, from 1979 to 1992, Denis Sassou-Nguesso was president of the Republic of Congo and ran it as a single-party Marxist state with the backing of the Soviet Union and Cuba.
During the 1993-94 civil war, Sassou-Nguesso's Cobra militia and Guy Brice Parfait's Ninjas were allied against Pascal Lissouba's Cocoyes in a conflict in which some 2,000 people were killed and tens of thousands displaced before an agreement was signed in December 1994 to end hostilities.
Sassou-Nguesso was re-elected in 2009 and 2016 and after nearly four decades in power, Denis Sassou-Nguesso was re elected after his rival dies of covid-19 in 2021. He is Africa’s third-longest-serving president, behind the presidents of Cameroon and Equatorial Guinea.
Congo's political parties have developed private armed militias, the militia groups were created to serve as the private armies of the political leaders of popular Congolese Labour Party and other Political parties and leaders. 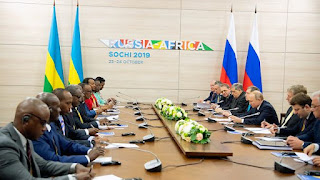 Private militias are armed military groups that are composed of private citizens and not recognized by federal or state governments. Since the government is unstable private armed militias are used by protecting life and private property of the delegates.
The African Union and 47 African Heads of State participated in the Russia-Africa Summit and Economic Forum in the Southern Russian city of Sochi on October 23 and 24, 2019 under the theme Russia and Africa: Forging Economic Ties, Creating Joint Projects.
During the meeting two Memoranda of Understanding were signed regarding African-Russian cooperation to include learning and promotion of the Russian Languages and mass media and use of information and communication technologies.
Did you know?
Around 42% of the population is under the age of 14, the median age is 19. The Republic of the Congo is about twice the size of Florida and about 68% of 5.4 million Congolese people live in the south and southwest of the country in the capital city of Brazzaville, 2nd largest city of Pointe-Noire and the 3rd largest city of Dolisie. Republic of the Congo former names are French Congo, Middle Congo, People's Republic of the Congo, and Congo Brazzaville.