In Dutch, a West Germanic language, Der Fliegende Hollander translates to The Flying Dutchman. In the 1600’s, the Netherlands, England, Portugal, and Spain were four colonial superpowers vying for the riches of African trade routes, spices, slaves, gold and minerals. The Dutch from the Netherlands were especially known for their fighting tempermente.

The competition between sea captains to make money from Africa’s trade routes, spices, slaves, and gold was intense. Beginning in the late 15th century until the 17th century, around 1595 to 1830, the Dutch shipped an estimated 500 million enslaved Africans from The Dutch Slave Coast, Slavenkust the present-day African country of Ghana.

The spices we take for granted today as we scroll though the grocery store were once scarce and extremely valuable. The Dutch control over the clove, pepper and nutmeg spice trade though The Dutch East India Company broke the stranglehold on the spice trade. English, Portuguese and Spanish spice traders were terrified of the Dutch sea captains.

For example, in 1601 a fleet of five Dutch ships drove away a fleet of thirty Portuguese ships from a long established Portuguese trading route. 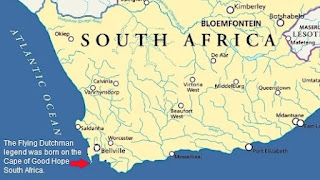 Superstitions are powerful among people who sail the seven seas. The sea is its own kingdom full of supernatural beings. The Portuguese called the African Cape of Good Hope the Cape of Torment.

Portuguese explorer Bartolomeu Dias was the first to successfully reach the southernmost tip of Africa in 1488 and named it the Cape of Good Hope.

Many ships attempted to sail the trading route but failed and died in the attempt. Meeting place of two violent currents, savage winds, warring storms, dramatic rock formations, and ships disappearing without a trace have made the Cape of Good Hope one of the world's largest ship graveyards to the present day.

In May 1822, there were 18 ships destroyed by storms or lost without a trace and attributed to the legendary Flying Dutchman.

Coupled with the fear of Dutch sea captains, the treacherous weather conditions of the Cape of Good Hope and the superstitious nature of seamen, The Flying Dutchman legend persists.

As legend has it the Dutch thought themselves superior to all seaman and instead of waiting for an infamous Cape of Good Hope storm to pass, a Dutch sea captain made a statement in a tavern putting his sailing skills above any storm mother nature and God would throw at him stating”I will be successful in this trip despite what God brings to me, I will land this trip in the name of God or the devil, whichever one gets me there!”

The captain therefore set sail into the Cape of Good Hope but his ship was never seen again. His ship is said to be the ghost ship The Flying Dutchman doomed to sail the seas forever never to make port because he defied God.

Royal Navy officer Captain Frederick Marryat is quoted as saying “Seamen, since the beginning of time, have been a race unto themselves, having their own mode of life, customs and beliefs. They believe in lucky and unlucky days, signs, clouds, birds, and breezes... Above all they believe in an Evil Spirit of the sea, who delights to bring harm to mariners, send adverse winds and waves, and drag them down into the depths of the ocean. This Spirit, they say, can change a gentle breeze to a terrific gale in an instant. He can cause vessels to sink that have no leak. He can set strange lights ahead and thus lure a crew to dangerous reefs.”

The Flying Dutchman in the Arts, Sports and Games.

The 1833 MS. Found in a Bottle short story by Edgar Allan Poe printed in the Baltimore Saturday Visiter is a story about the flying dutchman legend and the supernatural horrors at sea.

The first written account of the Flying Dutchman legend in novel form was penned in 1838 in The New Monthly Magazine under the title of The Phantom Ship by the English Captain Frederick Marryat.

The Flying Dutchman is a reoccurring ghostly character on the tv show SpongeBob SquarePants who is named after the ghost ship of the same name. The Flying Dutchman first appeared in the episode Scaredy Pants from Season 1.
Because of his athletic ability and speed, Shortstop, Right Fielder and First Baseman German baseball player Johannes Peter Honus Wagner was nicknamed The Flying Dutchman.  Playing mostly for the Pittsburgh Pirates throughout his baseball career, in 1936, the Baseball Hall of Fame inducted him as one of the first five members.