Facts about the Slave Trade in Africa

Facts about the Slave Trade in Africa

Nearly 40% of Togo, Benin, Nigeria, Cameroon, and Gabon were imprisoned Africans were enslaved on bights and were sold to the present day US State of Virginia. Many of these captives were Igbo, a people living in the area north what is now Nigeria.

Between the 16th and the 19th century, nearly one fifth of the enslaved Africans brought to colonial America were from African regions based mainly on the ports of Brass, Bonny, Opobo and Calabar in Nigeria.

The Slave Coast in the 18th and 19th century transatlantic slave trade was the section of the coast of the Gulf of Guinea, in Africa, in the present-day republics of Togo, Benin, and Nigeria.

Around 18% of Africans were sold to British colonies and the United States were captured from the Bight of Bonny. In the 1830’s Britain began enforcing the end of the slave trade on the bights.

The slave trade was the main income of most of the residents however; by the 1850’s, Bonny had become a major exporter of palm oil and palm kernels. One hundred years later, around 1950, oil became the chief source of income for the area. ExxonMobil Qua Iboe crude oil is produced from numerous offshore fields in the Bight of Bonny in Nigeria's South Eastern region.

Dutch sea captain Willem Bosman in 1705 wrote a firsthand detailed account of how the middle passage slave trade was managed in West Africa. - Not a few in our country fondly imagine that parents here sell their children, men their wives, and one brother the other. But those who think so, do deceive themselves; for this never happens on any other account but that of necessity, or some great crime; but most of the slaves that are offered to us, are prisoners of war, which are sold by the victors as their booty.
Those which are approved as good are set on one side; and the lame or faulty are set byas Invalides, which are here called Mackrons. These are such as are above five and thirty Years old, or are maimed in the Arms, Legs, Hands or Feet, have lost a Tooth, are grey haired, or have Films over their Eyes; as well as all those which are affected with any Veneral Distemper, or with several other Diseases.
The Invalides and the Maimed being thrown out, as I have told you, the remainder are numbered, and it is entered who delivered them. In the mean while a burning Iron, with the Arms or Name of the Companies, lies in the Fire, with which ours are marked on the breast.
This is done that we may distinguish them from the slaves of the English, French, or others (which are also marked with their mark), and to prevent the Negroes exchanging them for worse, at which they have a good hand. I doubt not but this trade seems very barbarous to you, but since it is followed by mere necessity, it must go on; but we yet take all possible care that they are not burned too hard, especially the women, who are more tender than the men. 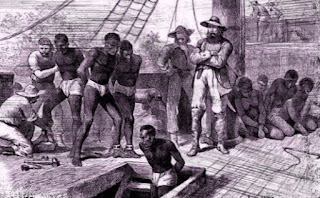 When we have agreed with the owners of the slaves, they are returned to their prison; where, from that time forwards, they are kept at our charge, cost us two pence a day a slave; which serves to subsist them, like our criminals, on bread and water: so that to save charges, we send them on board our ships with the very first opportunity, before which their masters strip them of all they have on their backs; so that they come to us stark-naked, as well women as men: in which condition they are obliged to continue, if the master of the ship is not so charitable as to bestow something on them to cover their nakedness.
The slaves are fed three times a day with indifferent good victuals, and much better than they eat in their own country. Their lodging place is divided into two parts; one of which is appointed for the men, the other for the women, each sex being kept apart. Here they lie as close together as it is possible for them to be crowded."
Learn more about Africa.

Land is Not For Women in Sierra Leone