The Kingdom of Kush was an ancient kingdom in Nubia what is now named Sudan which is just south of Egypt. Sudan is situated in Northern Africa, bordering the Red Sea, between Egypt and Eritrea. The Sudans were the largest country in Africa until 2011 when Sudan and South Sudan became two separate countries.

Nubian pyramids are pyramids that were built by the rulers of the ancient Kushite kingdoms. Sudan has more than 350 pyramids, double the number found in Egypt and many are dedicated to women rulers. Meroe thrived as the capital of Kush between from around 750 BCE to 350 CE and became renowned as a city of tremendous wealth.

Located on the Nile in the region of modern-day Sudan, Meroe grew rich from trade and its ironworks and abundant grain supply ensured a steady production of goods others wanted and needed; but it was the monarchy, periodically controlled by women that established and maintained the trade that encouraged such affluence.

The title Kentake or Kandake in the Meroitic language and means Queen Regent or Queen Mother or Royal Woman, this actually refers to an ancient African queen or group of ancient African queens so can this actually did battle with the Romans. There is no strong African society without strong mothers and there is no strong home without strong wise women so clearly the work of women is critically important.

Three women rulers of Africa Queens of Kush and the Meroë Empire.

Queen Shanakdakhete of the Meroë Empire.

Queen Shanakdakhete pronounced Shan-nan-dac-it, is the earliest known ruling African queen of ancient Nubia who exercised hands on power in the Meroë Empire.

The Queen has the power to declare war against another country and Queen Shanakdakhete exercised her power without council from the government of the day.

Her royal rights included the powers to appoint and dismiss council, regulate the military, cultural and agricultural service, declare war, make peace, direct the actions of the military, and negotiate and ratify treaties, alliances, and domestic agreements.

She ruled from about 170-150 BCE and is buried at the Pyramid at Meroë. The Empire of Meroë succeeded the Kingdom of Kush and extended its peak from the Third Cataract of the Nile to the site of the present city of Khartoum. Queen Shanakdakhete is depicted in a statue now housed at the Cairo Museum. 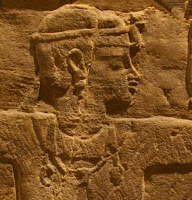 Pronounced A-mon-a-ren-us, Amanirenas the brave also known as Kandace is famous because of her role leading 30,000 Kushite armies soldiers against the Romans in a war that lasted five years, from 27 BC to 22 BC.

After an initial victory when the Kushites attacked Roman Egypt thousands of Roman slaves and treasures were captured and brought back to the Meroë Empire.

She went into one of the Palaces of the Roman King Augustus and beheaded of one of his Bronze Statues, returned home and buried it in her throne room.

Amanirenas ruled from 40 BC to about 10 BC after the death of her husband Amanirenas was actually a one eyed warrior Queen from Nubia is actually Queen of this Northern African country which is to the south of Kemet and she comes to rule during a time when Kemet has actually already fallen.

Plus-Sized Queen Amanishakheto ruled near the time of Christ's birth.

Amanishakheto pronounced ah-mah-nee-shah-khay-toe was a plus-sized, powerful and rich Queen who ruled from 10 BCE to about 1 BCE.

She is often depicted on pyramid murals as a large sized, powerful woman, covered with jewels, elaborate fringed and tasseled robes, and carrying weapons in one hand, preparing to lead her army against the enemies of the North and South.
There are several monuments of her and she is mentioned in the Amun Temple of Kawa. She was buried with treasures such as golden armlets, delicate glass ornaments and golden pendants adorned with faces of the Gods, in a pyramid over 100 feet high, her tomb was raided and destroyed by Giuseppe Ferlini.
Giuseppe Ferlini was an Italian soldier turned explorer and treasure hunter, who robbed and desecrated over 40 pyramids of Meroë at At Wad ban Naqa.