Queen Nzinga Mbande was a military strategist and powerful 17th-century female African ruler of the
Ndongo and Matamba Kingdoms. 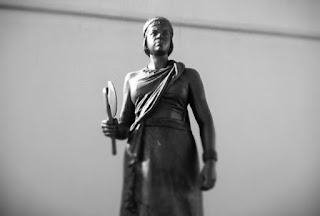 Queen Nzinga was one of the most women rulers of 17th century Africa fighting against the slave trade. Born in 1583, Queen Nzinga Mbande was the 17th-century queen of the Ndongo Kingdom and the newly established Matamba Kingdom.

In 1617, Mbandi Ngola Kiluanji, king of Ndongo, dies. His son, Ngola Mbandi, takes power and becomes the new king. However, he does not have his father's personality or his sister's military intelligence.

Her brother King Ngola Mbande realized the Portuguese established a settlement in the same year invading Mbundu land in order to imprison its people into slavery.

In 1626, Princess Nzinga became Queen of the Mbundu succeeding her brother King Ngola Mbande. European slave traders on the coast of southern Africa upset the political, social, economic and cultural landscape of the kingdom Ndongo and the entire region.

In the same year, the Matamba Kingdom was established after Queen Nzinga and her Mbundu citizens were forced from their ancestral lands by raiding Portuguese slave traders.

In the newly established Matamba Kingdom, Queen Nzinga established a Mocambo settlement offering sanctuary to runaway slaves and those who experienced oppression by the Portuguese, Dutch, and other colonial and African powers. Mocambo is a Mbundu word of the Bantu people living in Angola's North-West area; Mocambo means hideout.

A figure of the African resistance to colonialism, Queen Njinga marked the history of 17th century Angola. Outstanding and skilled strategist negotiator, she defended her country relentlessly until her death, in 1663, at the age of 82 years.

However, before her death, Queen Nzinga converted to Christianity, adopted the name Dona Anna de Souza, and made the Matamba Kingdom a formidable military state that dealt with the Portuguese traders on an equal footing.

Queen Nzinga is remembered in Angola for her war strategy and political intelligence, a statue of her was placed in Kinaxixi square in the heart of Luanda Angola in Southern Africa in 2002. Queen Nzinga statue was dedicated by President Santos to celebrate the 27th anniversary of Angola’s independence. 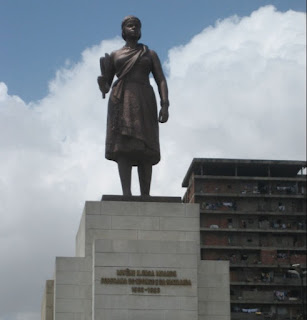