Where are Sudan pyramids mostly located

Sudan has the most pyramids and these facts are not taught in school. 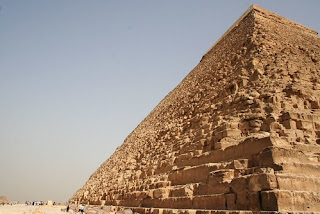 Which country has the most pyramids; Sudan is the answer.

They were constructed in Nubia to serve as tombs for royal families and wealthy citizens. Nubian pyramids differ from the Egyptian because they were built tall and narrow with offering temples.

The area of the Nile valley known as Nubia lies within present-day Sudan. Nubian pyramids are pyramids that were built by the rulers of the ancient Kushite kingdoms.

More than 350 pyramids grouped into five sites namely Meroë, El-Kurru, Jebel Barkal, Nuri, and later Sedeinga Sudan. They were constructed in Nubia over a period of a few hundred years to serve as tombs for the kings and queens and wealthy citizens.


Where are Sudan pyramids mostly located?


In a desert in eastern Sudan, along the banks of the Nile River, lies a collection of nearly 200 ancient pyramids. The Nile river is Sudan's primary water source; its major tributaries, the White Nile and the Blue Nile, meet at Khartoum to form the River Nile which flows northward through Egypt to the Mediterranean Sea.

With the exception of a ribbon of settlement that corresponds to the banks of the Nile, northern Sudan, which extends into the dry Sahara, is sparsely populated. Sudanese pyramids are far less well known nevertheless, Sudan pyramids older than Egypt.


Meroë Pyramids The most extensive Nubian pyramid site is at Meroë, which is located between the fifth and sixth cataracts of the Nile, approximately 240 kilometers 150 miles north of Khartoum. During the Meroitic period, over forty queens and kings, were buried there.

South Cemetery features nine royal pyramids. Four of the pyramids belonged to Kings and five belonged to queens. One hundred and ninety-five other tombs complete the cemetery.

West Cemetery is a non-royal site. It contains some one-hundred and thirteen tombs. The pyramids of Meroe in the 1830s as the Italian doctor-turned-explorer and treasure hunter Giuseppe Ferlini blew the tops off about 40 tombs during his quest for treasure.

El-Kurru Pyramids El-Kurru was one of the royal cemeteries used by the Nubian royal family. El-Kurru pyramids including the tombs of King Kashta and his son Piye, together with Piye's successors Shabaka, Shaba taka, and Tanwetamani.

Fourteen pyramids were constructed for their queens, several of whom were renowned warrior queens. Most of the pyramids date to the early part of the Kushite period, from Alara of Nubia 795–752 BC to King Nastasen 335–315 BC.

Nuri Pyramids Nuri is situated about 10 km or 6 miles from Jebel Barkal. Nuri was the burial place of 21 kings and 52 queens and princes including Anlami and Aspelta. The bodies of these kings were placed in huge granite sarcophagi.

Aspelta's weighed 15.5 tons and its lid weighed four tons. The oldest and largest pyramid at Nuri is that of the Napatan king and Twenty-fifth Dynasty pharaoh Taharqa.

Jebel Barkal Pyramids Jebel Barkal or Gebel Barkal served as a royal cemetery during the Meroitic Kingdom. The earliest burials date back to the 3rd century BC having nine pyramids.

Jebel Barkal is also a small mountain 98 meters or 321 feet tall located in Karima town in Northern State in Sudan, on a large bend of the Nile River, in the region called Nubia.

In 2003, the mountain, together with the historical city of Napata which sits at its feet, was named World Heritage Sites by UNESCO.

Sedeinga Pyramids These newly found groups of tiny sized pyramids were discovered near the village Sedeinga. The Sedeinga pyramids are a group of at least 35-80 small pyramids near Sedeinga, Sudan, built ca. 1 BCE.

They were discovered between 2009 and 2012 and date to the time of the Kingdom of Kush, an ancient kingdom in Nubia. They range in size from about 7 meters or 24 feet to 75 centimeters 30 inches wide.