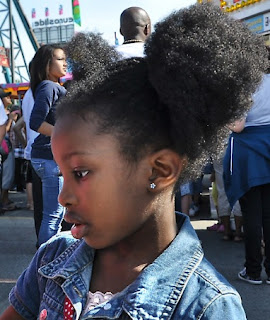 2. The Dipo Ritual to Initiate Young Girls into Womanhood

At the climax of the Manyatta ceremony, each Maasai Warrior initiate has his hair shaved by his mother. This is one of the most major moment of his life, as he now leaves the peak period of warriorhood behind and prepares for the responsibilities of adulthood.

With their heads newly shaved and their bodies rubbed with glistening red ocher, the initiates gather to receive the final blessings of the elders.  The elders walk among them, chanting prayers and spraying them with mouthfuls of milk and honey beer. A typical blessing is “May Enkai give you many children, many cattle and long healthy life.”

The Dipo Ritual to Initiate Young Girls into Womanhood

Shai Initiates of Ghana are wearing unique headdresses called cheia. Made of hoops of cane wrapped in blackened cord, the headdress is constructed on the girl’s head the day before the ceremony. It takes six hours to complete and will remain in place for a week. 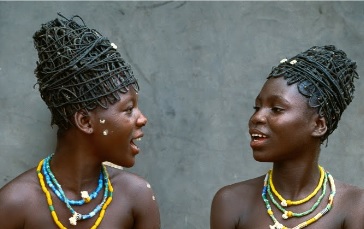 A girl on whom the Dipo is performed is known as Dipo-yo. Getting ready for the Krobos Ghanaian ceremony, Shai upper-class young girls will make her first appearance in the community as available young women similar to debutante balls in America.  The dipo ritual involves many rituals to purify and cleanse chaste young girls of the Krobos in the hills of Ghana.

As the time approaches, around Easter, an announcement is made throughout the Krobo land for parents to submit the names of their daughters due for the rite. This announcement is made on behalf of the Earth goddess Nene Kloweku.  Parents present their daughters to their clan priest responsible for the Dipo. The ceremony can be started on either Thursday or Sunday, the two sacred days for Nene Kloweku.

In the Kunene Region of Namibia, a young Himba woman wears her erembe headdress of a married woman. Himba women spend hours creating the red clay iconic hairstyles. Himba women, as well as Himba men, are famous for covering themselves with red clay called otjize paste, a cream mixture of fat and ochre pigment clay and scented oils. 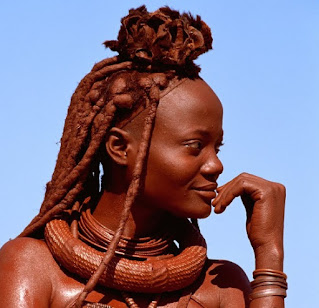 Himba women believe otjize adds to their traditional beauty-enhancing their attractiveness. The otjize is applied to the skin, hair twice a day gives their skin, and hair plaits a distinctive orange-red color, as well as texture and a unique traditional style. Otjize paste is often perfumed with the aromatic resin of African Commiphora Multijuga tree.

Over the years, there has been much speculation about the origins of the otjize paste practice, with a number of people claiming it is to protect skin from the harsh African sun or repel insects. Nevertheless, the Himba women say it is appealing to them, a sort of make-up they cheerfully rub on every morning when they wake. 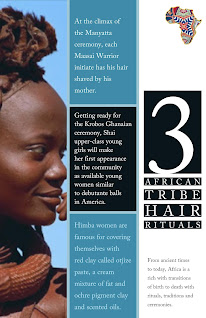