Cypraeidae common name cowries singular cowry is the symbol of fertility and birth, used for money and is a popular artifact used in fortune-telling.


Explore and Understand Africa Through Her Food and Culture.


Cowries occur primarily in coastal waters of the Indian and Pacific oceans. The cowries are a relatively small family of about 200 species but are the most collected of all seashells.  The basic shape of the shell is the same in all species. A natural coating of enamel on the outer surface gives the shell a brilliant polished look.
Long prized by people for their shape and attractive colors, they were widely used for money in ancient times. While some cowries are abundant, some species are now quite rare and get a very high price from collectors.
Cowrie or cowry shells are believed to be the first form of universal money. What is cowrie? It is a shell. There are over 200 species of cowrie shells but only two in particular; Cypraea moneta and Cypraea annulus are used as money.
The cowrie shells were used to buy slaves for transport to the colonies in the New World. Cowries came to West Africa through trade with Arabia in the 14th century; they became an important means of buying slaves. The cowrie shell has been used as money in many parts of the world, including Africa, Arabia, and Asia.

The Thai folktale Makato and The Cowrie Shell is a well-known folktale in which cowrie shells are used as payment from the King to the orphaned Makato. He worked hard, became a trusted member of the King's court and eventually Makato became King.


In the book When Things Fall Apart by Nigerian writer Chinua Achebe, there are many references to the gifts of cowries, cowries for payment, and cowries as indicators of wealth. In one scene in Achebe’s book, Okonkwo and other leaders of the village of Umuofia were held in jail and would not be released until a fine of 200 cowries plus 50 cowries for the court messengers was paid for each prisoner.
A British officer, who was in Eastern Nigeria in 1776, speaking of cowry money, said, "I found no other currency of any kind in the country; and upon an occasion, when an increase in the revenue of the province was enforced, several boatloads of cowries were collected." As late as 1801, the revenues of the British were collected in cowries, which was also the general medium of all financial transactions.
The Cypraeidae, or Cowries have long been one of the most popular collectible seashells. In many parts of the world, cowrie or other shells form the currency, even in countries long away from the natural source of supply of such shells.
Cowrie shells are also used as a decoration around the world. Cowrie jewelry has been a popular form of African jewelry for centuries. Many DIY jewelry kits feature cowrie shells for do it yourself-jewelry projects as hair charms, necklaces, bracelets, earrings their decoration uses are endless.
Apart from their use as currency, cowries play a very important role as charms and in fetish-worship among the Ewe people of Togo. These charms are worn on the neck, arm, wrist, and ankle, and regarded as talismans against wounds and sickness, and for luck. Being ornamented with cowries in many coastal parts of Africa is a common appearance.
The great demand for cowrie shells for ornaments and charms caused people to exchange all manner of articles for them, and therefore to make them into currency. The cowrie shell is used as a charm in America, in Europe, and in West Africa, in places many hundreds, even thousands, of miles from the places where it exists in nature.
Cypraeidae, common name cowries, singular: cowry, is the symbol of fertility and birth, has always been closely associated with women. It was the symbol of maternity by turning the shell into jewelry by adding to the arms, legs, hair, and neck.

There was a time in Togo when cowries were paid by the relations of a girl seeking admission among the Ewe people witchdoctors. When the engaged brought his wife home he paid to her parent's cowries.

At death ceremonies, relations, friends and acquaintances, place quantities of cowries in the grave with the dead, in order that the deceased may purchase food and palm-wine. Ewe people believed that cowries and everything placed in the grave including tobacco and the wine will be of use to the departed. 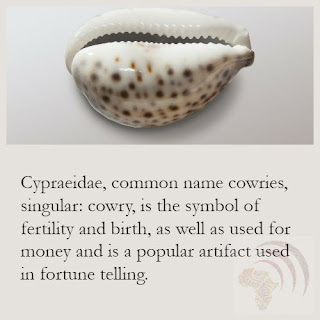 The Ghanaian cedi is the unit of currency of Ghana. The cedi is the Ghanaian word for cowrie, from the Fanti language of the West African Akan people.

Below are more articles you will find thought provoking. Ase.