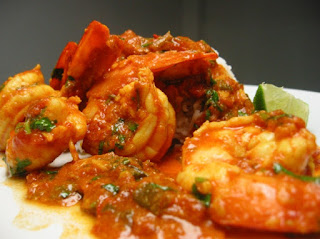 In a large fry pan over medium high heat, add butter, oil, onions and spices, fry until lightly browned. Add the prawns and pour in coconut milk. Simmer for twenty minutes, and add some lime juice. Serve with rice.

Did you know? South Africans of Indian origin comprise a heterogeneous community distinguished by different origins, languages, and religious beliefs. The first Indians arrived during the Dutch colonial era, as slaves, in 1684. English is spoken as a first language by most Indian South Africans, although a minority of the Indian South African population, especially the elders, still speak some Indian languages. These languages include Hindi, Tamil, Telugu, Urdu, Punjabi, and Gujarati. Indian South Africans are predominantly Hindu, but Muslims, Christians, and Sikhs also came to South Africa from India from as early as 1860.