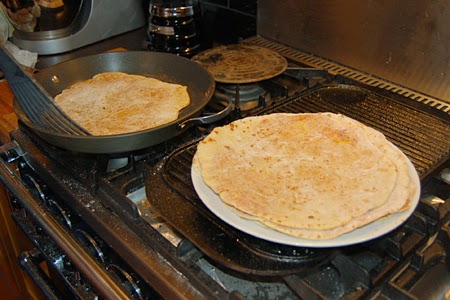 Roti pronounced rho tee is a staple bread recipe of countless South Africans influenced by Indian cooking. Roti bread is usually eaten with soups, stews and curries used in such a way to take the place of a spoon in Western culture.

Directions:﻿﻿
Mix flour and salt to make dough by hand. Add water or more flour depending on the dough’s consistency. The dough should feel slightly sticky to the touch but not stick to your hands.

Knead the dough and roll it into small balls of equal sizes. On medium heat add one tablespoon of oil to a large frying pan or griddle. Roll out the dough into round shapes using rolling pin.

Place rolled dough into the hot pan. Cook until light brown and flip in order to lightly brown the other side. Remove from heat and cover with a damp kitchen towel. Add more oil to the pan as needed.