Bunnies are generally ordered by sizes, such as a quarter loaf or half loaf. Just like Panera bread bowls, all parts of the Bunny Chow is eaten. The bread gets soggy and the curry soaks through the bread.

Curry comes from the Tamil word kari, or spiced sauce, which was originally a thin, soup-like, spiced dressing served in South Africa where many Indians live and work.

2 whole hollowed-out loaves of bread cut in half

Add all ingredients except the bread, stock and chicken and sauté for 3 minutes over medium heat.  Add remaining ingredients; simmer until the potatoes are soft 20 minutes. Spoon mixture into the hollowed-out bread and serve warm.

The history behind bunny chow

There are many stories about how bunny chow originated, but the one cited most often describes it as a totally portable dish served up to colored and black people under apartheid. The system not only separated black and white people but also Indians and colored people. The first Indians arrived during the Dutch colonial era, as slaves, in 1684. In the decades, 1690 to 1725 over 80% of the slaves were Indians. This practice continued until the end of slavery in 1838. Bunny chow started as a way of selling food to people who weren't allowed to eat in certain restaurants during apartheid. The bread was used as a holder, or a plate, so that nothing needed to be returned after eating. South Africans of Indian descent largely live in and around KwaZulu-Natal's’ city of Durban, South Africa with a population of over one million. 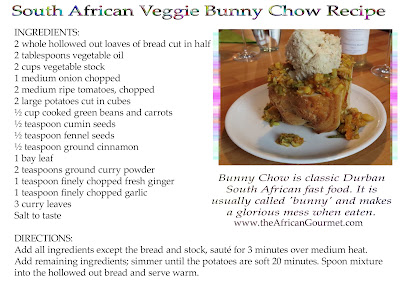