Only Place in the World Where Four Countries Meet

Kazungula Ferry unites four corners of Namibia, Zambia, Botswana and Zimbabwe of Africa. This is the only area in the world where four countries meet. 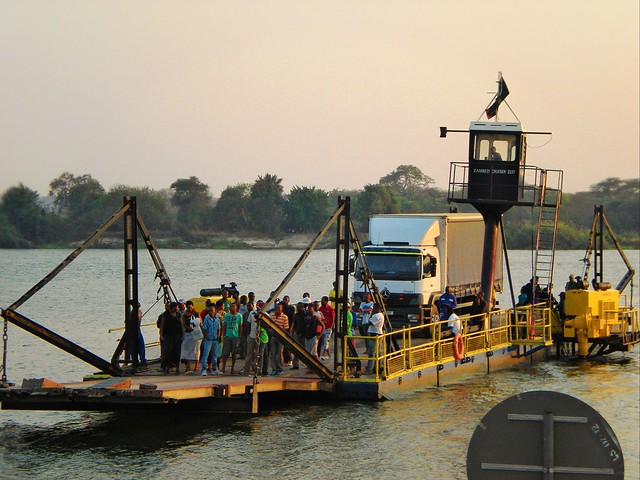 The Kazungula public ferry or pontoon service (a flotation device able to float itself as well as a heavy load) is driven by a side mounted diesel engine, transports a few vehicles at a time across the river.  The border crossing is the only place in the world where four countries come close uniting at a quadripoint.

A quadripoint is a point on the Earth that touches the border of four distinct territories. Namibia, Botswana, Zimbabwe and Zambia are believed to be a quadripoint however, the countries of Zambia, Zimbabwe and Botswana actually only meet.

The ferry at Kazangula provides transportation to people and on average, 70 trucks cross with the ferry per day. About 100 trucks on both sides of the ferry crossing take up to two weeks before they are able to cross the Zambezi River.  The Kazungula Ferry is one of the largest ferries in south-central Africa, having a capacity of 70 tons and runs between Kazungula, Zambia and Kasane, Botswana.

In 2003 the Kazangula ferry capsized and was the site of a disaster where 18 people drowned. In order to alleviate the poor transportation issues, Kazungula Bridge project was planned in 2007 as much needed infrastructure transportation plan on the Zambezi River and to the surrounding African countries of Botswana and Zambia.

The Kazungula Bridge is a multi-national project on the North-South corridor on the Zambezi River. The bridge construction is expected to take four years at a cost of US $259 million.