Votes were cast from around the world for the Seven Natural Wonders of Africa by photographers, conservation experts, museums, authors, researchers, environmentalists, travel tourism experts, and government, NGO's and private specialists.

The President and the founder of the Texas US-based not for profit New Seven Wonders is Dr. Philip Imler. According to Natural Wonders Website, votes were based on statistical and traditional significance along with uniqueness and pure splendor.

The Red Sea Reef of Egypt and Sudan are over 5,000 years old, extending along 1,240 miles of shoreline. The reefs of the Red Sea are some of the most understudied of those found anywhere on Earth.

The Red Sea is the world's northernmost tropical sea; ancient Egyptians conducted the earliest known exploration of the Red Sea, as they attempted to establish commercial routes to Punt. Reef systems are better developed along the Red Sea mainly because of its greater depths and an efficient water circulation pattern.

The Red Sea water mass-exchanges its water with the Arabian Sea, Indian Ocean via the Gulf of Aden. The Red Sea was formed by the Arabian Peninsula being split from the Horn of Africa by movement of the Red Sea Rift.

This split started in the Eocene and accelerated during the Oligocene. The rich diversity is in part due to the 2,000 km (1,240 mi) of coral reef extending along its coastline; these fringing reefs are 5000–7000 years old and are largely formed of stony corpora and Porites corals.

The reefs form platforms and sometimes lagoons along the coast and occasional other features such as cylinders such as the Blue Hole Red Sea at Dahab. These coastal reefs are also visited by pelagic species of Red Sea fish, including some of the 44 species of shark.

Nile River the grandfather of all African rivers is the longest river in the world flowing into more than 10 countries in Africa. The completion of the Aswan High Dam in 1971 and the resultant Lake Nasser have altered the time-honored place of the Nile River in the agriculture and ecology of Egypt.

Egypt is one of the oldest agricultural civilizations; the River Nile allowed a sedentary agricultural society to develop thousands of years ago.  More than 90 percent of Egypt is desert; it has only one main source of water supply, the Nile River.

Egyptian agriculture is almost entirely dependent on irrigation. The shortage of Nile waters is a major factor due to Egypt’s agriculture uses around 85 percent of the freshwater resources. Growing water demand, driven by population growth and foreign land and water acquisitions, are straining the Nile’s natural limits.

The Sahara Desert encompassing nearly 10 counties high gusting winds are capable of forming sand dunes more than 100 feet high. The world’s largest hot desert and the third largest desert in the world, the Sahara is one of the most unforgiving locations on the planet, covering 8.5 million square kilometers or 3.3 million square miles, about the size of the South American country of Brazil.

The Sahara makes up 25 percent of the continent of Africa. However, the Sahara is by no means an empty wasteland, desert dwellers work, love and dream on the Sahara’s sand and gravel for a thousand years living with hurricane-force sandstorms and annual rainfall that averages less than an inch a year.

The around 68,000 sq km or 17 million acre Okavango Delta marshlands and plains are home to some of the world’s most endangered species of large animals, such as lions and cheetahs, white and black rhinoceros, and the endangered African wild dog.

The Okavango swamps form the world's largest inland delta. Mekoro are dugouts made of the trunks and large roots of the sausage trees. These canoes have been used for thousands of years as transportation in the Okavango River delta in Botswana.

The 2009 Ngorogoro Wildlife Conservation Act placed new restrictions on human settlement and subsistence farming in the Crater, displacing Maasai pastoralists, most of whom had been relocated to Ngorongoro from their ancestral lands to the north when the British colonial government established Serengeti National Park in 1959.

Ngorongoro crater is the largest unbroken caldera in the world. The crater, together with the Olmoti and Empakaai craters are part of the eastern Rift Valley, whose volcanism dates back to the late Mesozoic / early Tertiary periods and is famous for its geology.

The roof of Africa, Mount Kilimanjaro is Africa’s highest Mountain. Nearly every climber who has summited Uhuru Peak, the highest summit on Kibo’s crater rim, has recorded his or her thoughts about the accomplishment in a book stored in a wooden box at the top. Mount Kilimanjaro is the highest mountain on the continent. It towers over 19,300 feet, which is so tall that glaciers can be found at its summit even though the mountain is near the equator. 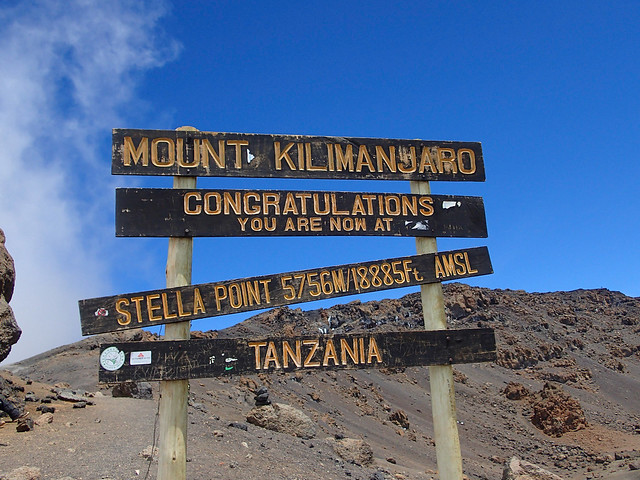 The seven ancient wonders are The Great Pyramid of Giza, which can still be seen today; the Hanging Gardens of Babylon; the Statue of Zeus at Olympia; the Temple of Artemis at Ephesus; the Mausoleum at Halicarnassus; the Colossus of Rhodes; and the Lighthouse of Alexandria.

On September 7, 2007, the official New Seven Wonders of the World were announced after more than 100 million votes were cast worldwide, they are the Great Wall of China, Petra, Chichén Itzá, the Statue of Christ Redeemer, the Colosseum, Machu Picchu, and the Taj Mahal. The Seven Natural Wonders of the world are the Aurora Borealis, the Harbor of Rio de Janeiro, the Grand Canyon, the Great Barrier Reef, Mount Everest, Paricutin and Victoria Falls.