Khat is a stimulant drug containing cathinone and cathine, chewing Khat is a historic traditional drug or illegal depending on where you live in Africa. Khat stimulant drug is derived from a shrub named Catha edulis. 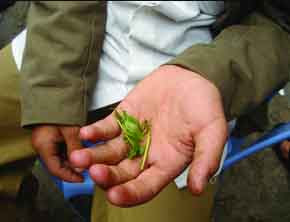 
Khat (pronounced cot) is an evergreen shrub that grows in areas bordering the Red Sea, including countries in East Africa particularly Ethiopia. Cathinone and cathine are chemicals similar to the effects of amphetamines and result in similar stimulant effects in the brain and body.
Khat is the locally chewed social drug in places such as Ethiopia and has a long history as a social routine dating back thousands of years. Khat plant is widely cultivated and known by a variety of names, including qaat and jaad in Somalia, and chat in Ethiopia.

Khat is grown in groves and three to four hours per day is devoted to striping the branches chewing the leaves releasing the drug. The khat chewer plucks the tender leaves from the branches and tucks the leaves into their cheeks, eventually forming a wad similar to chewing tobacco. 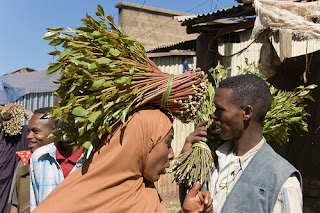 Khat is a stimulant that speeds up the heart and breathing and increases blood pressure. Khat makes a person feel alert and relieves stress, that makes it a popular simulate among students.

In some countries, 15–20% of children under the age of 12 are also daily users of khat. Khat is a controlled substance in some countries, such as the United States, Canada, and Germany, while its production, sale, and consumption are legal in other nations, including Djibouti, Ethiopia, Somalia, and Yemen.