African staple foods that can make if you know how to cook cassavas, sweet potatoes, and cocoyams.

African Food Staple of Cassava
Cassava is known by various names, manioc, yucca, yuca, mandioca, and tapioca. Cassava originated from tropical America and was first introduced into Africa in the Congo Basin by the Portuguese around 1558.

Cassava is a major staple food in the developing world, providing a basic diet for over half a billion people. Nigeria is the world's largest producer of cassava, while Thailand is the largest exporter of dried cassava.

Nearly every person in Africa eats around 176 pounds or 80 kilograms of cassava per year. It is estimated that 37% of dietary energy comes from cassava. The Democratic Republic of Congo is the largest consumer of cassava in sub-Saharan Africa, followed by Nigeria.

Many varieties of cassava contain a substance called linamarin that produces cyanide that makes the crop toxic if inadequately processed. Various processing methods, such as grating, sun drying, and fermenting, are used to reduce the cyanide content.

An efficient processing method will release the enzyme linamarase by disintegrating the microstructure of the cassava root. Excessive consumption of cassava, as the sole source of dietary energy and the main source of protein, could thus increase vulnerability to cyanide toxicity.

Several diseases have been associated with the toxic effects of cassava. Its causative role has been confirmed in the pathological condition of acute cyanide intoxication and in goiter, a swelling of the neck resulting from enlargement of the thyroid gland.

There is also some evidence linking two types of paralysis to the combined effects of high cyanide and low sulfur intake. Tropical Atoxic Neuropathy and Epidemic Spastic Paraparesis, causes damage to the spinal cord.

Tropical ataxic neuropathy is a paralysis disease common in Nigeria where a lot of cassava is consumed without the addition of sufficient protein-rich supplementary foods to provide an adequate supply of sulfur amino acids for the detoxification of ingested cyanide.

All the cases reported came from the area where cassava is cultivated and eaten in large quantities. In the case of epidemic spastic paraparesis, in parts of Mozambique, a bitter toxic type of cassava is often planted as a food reserve because of its high yield as cassava constitutes about 80% of the basic diet.

This disease affects mainly women and children. It damages the nerve tract in the spinal cord that transmits signals for movement, thus causing aspastic paralysis of both legs.

Cassava is toxic when insufficient fermentation of the cassava that leaves residual cyanide. Cassava can be peeled, sliced and sun-dried for about three weeks after which the cyanide level is reduced to about, pounded to a flour, mixed with hot water to make a thick paste-like stiff mashed potatoes.

This paste is normally eaten with a relish of beans, fish or vegetables, to provide a well-balanced meal. This is a safe way to eat cassava in Africaminus the cyanide.

Directions
In a large pot, add oil, curry, salt, and onions over medium-high heat and cook onions until soft and light brow. Add coconut milk, hot pepper then cassava leaves, stir and cover 5 minutes. When leaves are cooked to your liking (soft or with some bite left in them) serve with ugali.


African Sweet Potato
Sweet potato contains raffinose, one of the sugars responsible for flatulence. Three of the sugars which occur in plant tissues, raffinose, stachyose, and verbascose are not digested in the upper digestive tract, and so are fermented by colon bacteria to yield the flatus gases, hydrogen and carbon dioxide.

Sweet potatoes contain oxalates that can increase the risk of kidney stones. Kidney stones are the result of a buildup of dissolved minerals on the inner lining of the kidneys.

Yams are native to Africa and Asia. The sweet potato, maybe native to tropical America introduced to Western Africa by the Portuguese in the 1500s.

Just as spinach sweet potato leaves cook down a lot and have a similar
taste.

Directions
Add ingredients into a large pot and sauté about 3 minutes. Serve over rice.

Making African Cocoyams
African cocoyams are often associated with peasant crops; cocoyam is considered a poor man’s crop or a woman’s crop. Cocoyams have several plant varieties, some with edible tubers and others with edible stems. Cocoyam or Taro plants are a traditional woman's staple root crop in many countries in Africa.

Cocoyam, if eaten raw, the calcium oxalate crystals cause a stinging feeling to the mouth and throat; cocoyam must be cooked before being eaten. The high content of calcium oxalate crystals in some species of cocoyam can cause kidney stones. The bitterly pungent high oxalate plant varieties of cocoyam can be reduced by peeling, grating, soaking and fermenting during processing.

Women are the cultivators of cocoyam farming in most African countries, thus improving cocoyam production should have a direct impact on the most economically vulnerable groups. Women cocoyam farmers play an important role in farming for daily food and income for their families, especially in Nigeria that is one of the largest producers of cocoyam in the world contributing about 40% of total annual production. 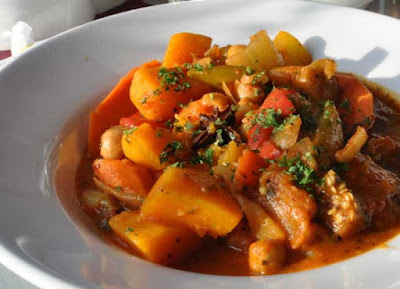 Directions
Add all ingredients to a large pot, simmer until thick 25 minutes. Serve warm
with rice.