Liberian Kanya is a creamy no-bake peanut candy made with rice, peanuts, and sugar.

No need to turn on the oven to make these simple no-bake African peanut butter candies; this makes them the perfect kids’ recipe to add to your international recipe files. 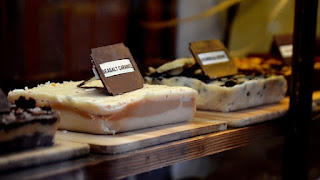 In a large bowl add all ingredients and mix well. Using your hands, roll into balls or press into an 8x8 pan and then cut it into squares with a lightly greased knife. Wrap pieces in parchment paper or store in airtight containers.

Note that the spices are not part of the traditional Kanya recipe but add wonderful flavor.

About Peanuts and Peanut Butter Uses and Storage

Peanuts belong to the pea-and-bean family, the legumes; they are not nuts at all. Nevertheless, like nuts, they are always popular in salads and sandwiches, cookies, and desserts as well as just plain salted. And like peas and beans, peanuts are good in main dishes, in soups, and in combination with other vegetables.

Peanuts and peanut butter are well worth a place in everyday menus because of their high food value. The idea of using them often in family meals is nutritionally sound since peanuts are exceptionally high in niacin, are important also for other B vitamins. Among the vegetable foods, peanuts rate high in quantity of protein.

Peanuts take up moisture readily. Peanut butter is made in different grinds. The types usually found on the market are regular grind, fine to medium, and coarse or chunky. Some peanut butters are just ground roasted peanuts plus salt; to others stabilizers have been added in order to impede oil separation.

How to Roast and Salt Peanuts

If you buy peanuts raw or grow your own here is an easy way to roast and salt them:

First, spread the shelled peanuts in one layer in a shallow pan and heat at 300° F. (slow oven) 30 to 45 minutes, depending on size of nuts and how brown you want them. Stir nuts often as they heat, Check on brownness from time to time by removing the skins from a few nuts.

For redskins, add butter or margarine immediately after removing from oven, 1 teaspoon to each cup of peanuts. Stir until nuts are evenly coated, spread on absorbent paper, and sprinkle with salt.

For plain salted peanuts, cool, and slip the skins off by pressing between thumb and forefinger. Add butter or margarine ( 1 teaspoon to each cup of nuts) and place over low heat, shaking or stirring nuts constantly until well-coated and warm. Spread on absorbent paper and sprinkle with salt while warm.

Peanuts bought roasted in the shell maybe shelled, warmed in a little butter or margarine over low heat, and salted as above.

Settlement of freed slaves from the US in what is today Liberia began in 1822. Liberia’s name derives from the Latin word liber meaning free. The African country was so named because the nation was created as a homeland for liberated African-American slaves. Liberia is located in Western Africa, bordering the North Atlantic Ocean, between Cote d'Ivoire and Sierra Leone with a terrain of mostly flat to rolling coastal plains rising to rolling plateau and low mountains in the northeast.

About the population and people of Liberia

In Liberia, more 33 percent of the population lives within a 50 mile or 80 km radius of the capital Monrovia. Around 51 percent of Liberians are Urbanites while 49 percent are rural dwellers. Female genital cutting (FGC) is practiced by 10 of Liberia’s 16 tribes and affects more than two-thirds of women and girls. FGC is an initiation ritual performed in rural bush schools, which teach traditional beliefs on marriage and motherhood.

A brief look at Liberia’s economy