African food recipes vary from village to village. The food of Africa is as diverse as its culture and language. Food of Africa reflects its history.
Try four easy African recipes from The African Gourmet.

The food of Africa is as diverse as its culture and language. African food is often highly seasoned with no less than five or six spices blended masterly into one dish. Fishing is the lifeblood of Africa. The coastline of Africa is 18,950 miles, countless lakes and rivers, Africa's largest lakes are located in the Great Lake region and are centered on and around the East African Rift.

The longest river in the world, the Nile at 4,132 miles is located in eleven countries in Africa, Tanzania, Uganda, Rwanda, Burundi, Congo, Kenya, Ethiopia, Eritrea, South Sudan, Sudan, and Egypt. West African nations have some of the richest fishing grounds in the world.

Imported and locally grown cereal grains such as sorghum, pearl millet, finger millet, teff, fonio, wheat, and rice are consumed in large quantities and are a major part of the African diet.


Goat meat is a popular recipe ingredient in Africa. 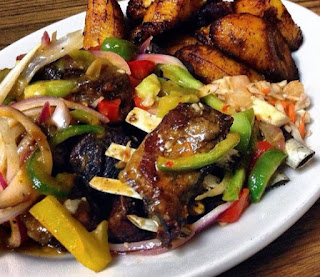 If you like French, Italian, English, Caribbean, American, Spanish, Dutch, and native foods you will love African food.

In Africa, you will find dishes influenced by people who lived there for millions as years as well as major influences from cultures that colonized Africa and newly established fast-food chain restaurants.

In addition, with a range of climates and growing conditions, the ingredients for African cuisine are diverse. It is impossible to group African food into one category.

Food recipes of a community are often closely related to where they live as well as the increasing urbanization of African populations.
Generalizations about African food are not helpful in describing a subject as complex as diets, which depend on many economic, environmental, social and cultural factors. African food recipes are usually based on a carbohydrate staple served with soups, relishes, and sauces, which may or may not be spicy, prepared from a wide variety of other ingredients.

With local influences, colonization and a growing fast-food market, there is no way to precisely describe African food except, the food of Africa reflects its history and future. 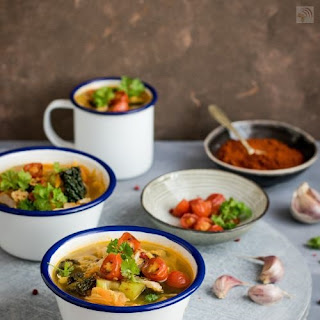 Directions
In a large lidded pot add all ingredients; boil then turn the heat down to simmer 15 minutes. Serve warm with fresh bread.

About Jackfruit.
Jackfruit is the largest tree-borne fruit in the world, one fruit can weigh between 10 and 100 pounds with yellow, banana-flavored flesh and contain 100 to 500 seeds in a single fruit. The jackfruit is rich in protein, potassium, calcium, and iron.
Do not let your jackfruit go bad, when fully ripe, the unopened jackfruit emits a strong disagreeable odor, resembling that of decayed onions, while the pulp of the opened fruit smells of pineapple and banana.
Jackfruits turn brown and deteriorate quickly after ripening. No one knows the jackfruit place of origin but in Africa, it is often planted in Central African Republic, Kenya, Uganda, and Tanzania Zanzibar. 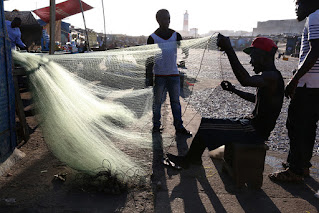 Fishing in Ghana Over a billion people, most of whom are poor, depend on fish as a source of animal protein. Fish is the cheapest source of animal protein in Africa. Seafood recipes are popular not only because of economics; Africa has a coastline measuring 18,950 miles or 30,500 kilometers.
The continent is surrounded on the west by the Atlantic Ocean, on the north by the Mediterranean Sea, on the east by the Red Sea and the Indian Ocean, and on the south by the circulating waters of the Atlantic and Indian oceans.
Countries in Africa with the Longest Coastlines. 1. Madagascar 2. Somalia 3. South Africa 4. Mozambique 5. Egypt 6. Eritrea 7. Morocco 8. Libya 9. Angola 10. Namibia.
Boiled Yams with Tomato Fish Stew Recipes are below.

3 fillets of any fish
2 yellow onions chopped
3 cloves garlic crushed
3 cups vegetable stock
3 tomatoes, diced
As many hot peppers as you can stand
Salt to taste

Directions
In a large pot on medium heat, add oil then sauté garlic and onions one minute. Add all ingredients together in the large pot and simmer covered for 30 minutes. Serve warm with yams or rice.

Ingredients
1 medium yam (not sweet potato, yams are white inside) diced
1 teaspoon salt
Directions
In a medium pot filled with water add salt and boil. Add yams, cover and simmer on medium heat for 15 minutes. Strain water from yams with a colander and serve as a side dish to Obe Eja Tutu African Tomato Fish Stew.