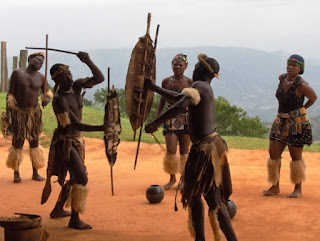 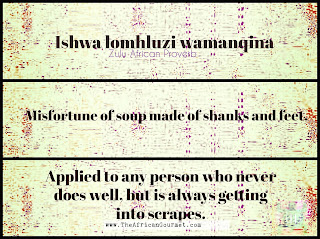 He is a buck of an endless forest.

A saying applied to a shiftless person, one who never continues long in any occupation.

A brand burns him who stirs it up.

This proverb is an exact equivalent to the English one, Let sleeping dogs lie.

This saying is used to denote anything unusually grand. The marriage festivities of one of the ancestors, Mapassa, said to have been carried on for a whole year.

Misfortune of soup made of shanks and feet.

Applied to any person who never does well, but is always getting into scrapes.

One fly does not provide for another.

A saying of the industrious to the idle, meaning that each should work for himself as the flies do.

Bakuba is far away, no person ever reached it.

Bakuba is an ideal country. This proverb is used as a warning against undue ambition, or as advice to be content with that which is within reach. It is equivalent to the English saying, It is no use building castles in the sky.

They have slaughtered at Kukwane where much meat is obtainable.

According to tradition, there was once a very rich chief who lived at Kukwane and who was in the habit of entertaining strangers in a more liberal manner than any who went before or who came after him. This proverb is used to such as ask too much from others, as if to say, It was only at Kukwane that such expectations were realized.

I rejoice that Kolomba's mother is dead.

The mother of Kolomba was, according to tradition, a very disagreeable person. This saying is used when anything that one dreads or dislikes has passed away.

It is not everyone who is a son of Gaika.

Gaika was at the beginning of this century the most powerful chief west of the Kei. This proverb signifies that all are not equally fortunate.

You will shed tears with one eye like a monkey.

A warning used to deter any one from being led into a snare of any kind. It is said that when a monkey is caught in a trap he cries, but that tears come out of one eye only. 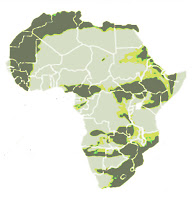 It is the seed of the umya.

This saying is applied to anything or person considered very beautiful. The seed referred to is like a small jet black bead.

He has drunk the juice of the flower of the wild aloe.

Said of a dull, sleepy person. Wild aloe juice when drunk has a stupefying effect, and benumbs the limbs so as to make them powerless for a time.

The walls have come into collision.

Said of any dispute between persons of consequence.

Said of anyone who has come to a resolution without yet expressing it. From its appearance it cannot be said with certainty whether a watermelon is ripe.

You will find out what Hili of the Amambalu experienced.

Hili, or Tikoloshe, is a mischievous being who usually lives in the water, but who goes about as a human dwarf playing tricks on people.

He milks the cows when no one is watching them. He causes women to fall in love with him, for he is of a very amorous disposition towards the female sex. It is said that a long time ago there was a man of the Amambalu who had good reason to suspect that his wife had fallen in love with Hili.

He accordingly pretended to go upon a journey, but returned in the middle of the night and fastened his dogs at the door of his hut. He then went inside and kindled a fire, when, as he anticipated, he found Hili there.

The man called his neighbors, who came with sticks and beat Hili till he was unable to move. They then tied him up in a bundle, fastened him to the back of the woman, and sent her away to wander wherever she liked.

This saying is applied as a warning to people to avoid doing wrong, lest the punishment of Hili overtake them.