With the help of Ugandan exiles backed by Tanzanian forces seize control of the capital of Kampala Uganda, April 11, 1979, marked the end of Idi Amin decade long violent rule.


This Day in History Idi Amin.


Uganda gained its independence on October 9, 1962, and Milton Obote became the nation’s first prime minister. In February 1966, following accusations that Obote and Amin were responsible for smuggling gold and ivory from Congo, Obote suspended the Ugandan constitution and announced himself, president.

Shortly thereafter, Obote sent Amin to overthrow King Mutesa II, who ruled the powerful kingdom of Buganda in South-Central Uganda.  Obote began to question Amin’s loyalty and ordered his arrest and in 1971, General Idi Amin, commander of the Ugandan armed forces overthrew the government of Milton Obote and declared himself president of Uganda.

Idi Amin Dada was a dictator and dangerous separatist, he launched a genocidal program to purge Uganda of its Lango, 6.3 percent of the population and Acholi, 4.4 percent of the population of Uganda ethnic groups who were loyal to Obote. In 1972, Amin ordered all Asians who were not Ugandan citizens to leave the country and roughly over 70,000 fled.

Then-President Idi Amin, in his drive to return Uganda to Ugandans, expelled the South Asian population that composed a large share of the country’s business people and bankers. Amin organized groups such as the State Research Bureau (SRB) and Public Safety Unity (PSU), whose main purpose was to eliminate those who opposed his regime.

In 1979, his eight years of chaotic rule ended when Tanzania and anti-Amin Ugandan forces invaded and toppled his regime. Amin had launched an unsuccessful attack on Tanzania in October 1978 in an effort to divert attention from Uganda’s internal problems.

Amin escaped to Libya, eventually settling in Saudi Arabia. Amin is held responsible for the murder of 300,000 Ugandans but ever was brought to justice for his atrocious crimes. Amin lived out the remainder of his life in Saudi Arabia until his death of organ failure in 2003.

Located in The Hague, The Netherlands, the ICC is an independent judicial body with jurisdiction over persons charged with genocide, crimes against humanity and war crimes.

The United Nations now has a wide variety of international courts and ranging from the International Court of Justice (ICJ), which is a principal structure of the organization; to the ad hoc criminal tribunals established by the Security Council; to the ICC and ITLOS, which were established by conventions drafted within the UN but which are now independent entities with special cooperation agreements.

The IJC’s role is to settle, in accordance with international law, legal disputes submitted by States give advisory opinions on legal questions referred to it by authorized UN organs and specialized agencies. Cooperation by the States is key to the court's success. 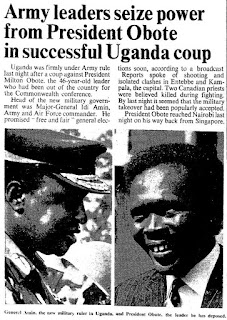